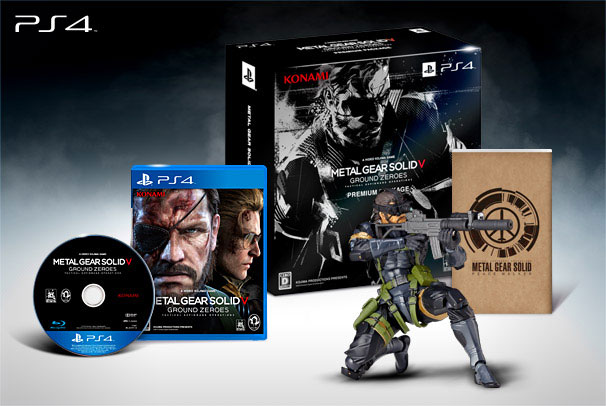 The bundle will include a retail copy of Metal Gear Solid V: Ground Zeroes, Revoltech Big Boss action figure with a bunch of accessories, and a Peace Walker novel with illustrations by Yoji Shinkawa. It will be sold by Amazon Japan.

Secondly, Konami Style Japan will offer Metal Gear Solid V: Ground Zeroes Limited Edition for PS4, PS3 and Xbox 360. This will include a retail copy of the game, as well as a Big Boss Play Arts Kai action figure. Thirdly, there’s the normal version, again launching on PS3, PS4 and Xbox 360. This simply consists of the game on a disc. Also announced, a Metal Gear Solid V: Ground Zeroes limited edition watch. Like the Metal Gear Rising watch, this one has been created in collaboration with Wired. To see the the full details for each of these products, go here.

Something that is surprising here is that there does seem to be a retail version for PlayStation 4 after all, but Konami hasn’t announced one yet outside of Japan.