Kiefer Sutherland was interviewed by IGN about the new season of tv series 24, and they also talked briefly about his role as Snake in Metal Gear Solid V.

Sutherland said he has been working on the game for over a year.

On the technical process, the actor explained that when performing, he is wearing 50 dots on his face corresponding to cameras recording his movements. 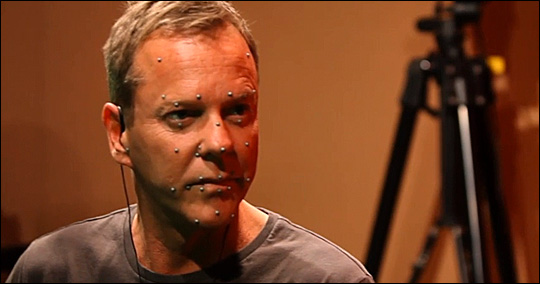 Sutherland was very impressed by the motion and facial capture technology used, saying that it looks so real that this might be the way movies will be made in the future.

He was being shown a small clip in its final stage, of Snake riding a horse and walking at different speeds. Apparently you could even see the horse’s ears move, as well as the pulse in his throat.

Sutherland described the person in charge as a technical wizard, and the result as ‘unbelievable’.

He added that he was requested to do a really low and raspy voice for his role of Snake.