As is the case with every Metal Gear Solid launching in Japan, so, too a Premium Package was being offered for Snake Eater when it came out in 2004. These Premium Packages, large boxes containing some nice extras aside from the game itself, make for popular collector’s items. 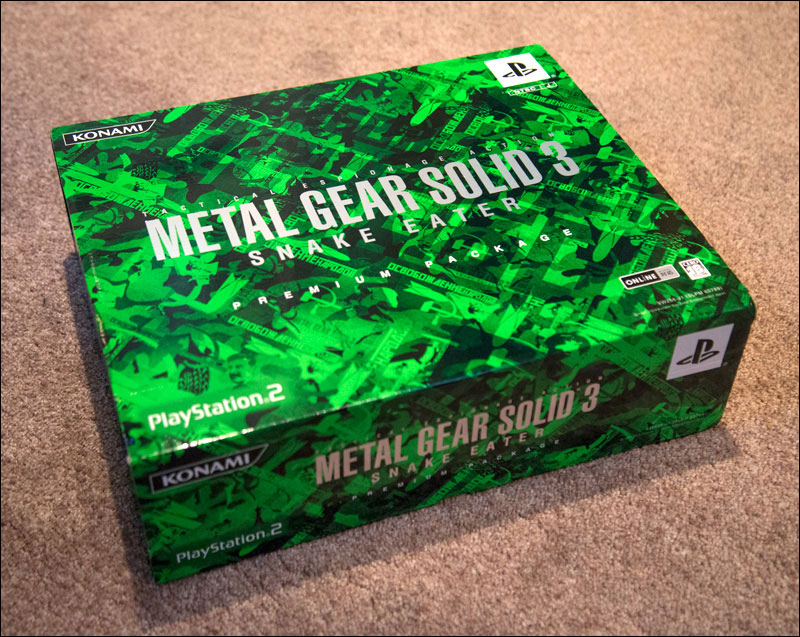 The outer box is made of brightly green colored cardboard, decorated with a pattern reminiscent of the graphic elements in the title screen of the game, including soviet symbols, Russian text and missiles in different shades of green. On the center is the logo in shiny silver lettering. Opening the lid reveals a vintage-styled box with a drawing of the Shagohod on its lid, and the name in Cyrillic script, the writing system used in Russia. It’s probably made to look like a Russian made toy from the era Metal Gear Solid 3 takes place in. Some more illustrations and text on the sides. The Shagohod model is a bit smaller than the box suggests, but it does look authentic, and it’s actually quite heavy. It’s a 144 to 1 scale model, and it’s very detailed. Underneath this box are the other items, among them of course the game itself. The cover art differs from that of the regular version (this is actually the same box art used in North America). Then there are two books and a four panel wallet with a DVD. The stickers warn for spoilers. Both the DVD wallet and the larger of the two books are made from what looks like recycled paper. Because of the brown, empty covers they kind of look like confidential files, which may have been the intention since this game is all about the era of espionage. The two books are called the ‘L’ and the ‘R’ book. One of the books is a MGS story booklet, the small one, but of course it’s all in Japanese. There’s an artwork of a satellite on the inside of the cover. The outside looks like it represents a wall made from large, dark stones. The ‘R book’ has a page filled with words starting with an R. The other book is an art book that contains interesting behind-the-scenes material. There are character artworks, research photos, commentary by the creators and more. It also comes with a fold-out poster with art by Noriyoshi Ohrai. This is a really nice book filled with beautiful, full page prints containing artworks and photographs. On the reference photo below you can see the Mauser, which is the weapon EVA uses (except hers is a Chinese fake, as Snake points out in the game). Because this is the ‘L book’, the page is filled with L-words. Metal Gear Solid 3: Snake Eater Premium Package is a very nice bundle to own for Metal Gear collectors. All the items fit nicely in the box, so they can be conveniently accessed and stored.

Of course, since the item only came out in Japan, some of the pieces can’t really be used by non-Japanese speaking collectors, but when it comes to the artbook, even though it’s a shame not being able to read the descriptions, it mainly relies on images.

Still, this Premium Package will mainly appeal to collectors. And for a Metal Gear fan it’s an awesome collector’s item indeed.