Realizing some of the shocking scenes in Metal Gear Solid V was difficult, but it was also necessary. This was explained by Hideo Kojima in an interview with Belgian fansite MetalGearSolid.be.

The site asked Kojima how is team reacted to the horrible scene with Paz that can be seen in the E3 2012 trailer. Kojima explained that, as one can imagine, the team was very much opposed to the idea. However, for Kojima it was a very important scene, because it will justify the metamorphosis Snake will go through, and it is from here MGSV will become a dramatic episode. Of course, it was necessary to have this cruel scene imposed on the player to show Snake’s emotions from a narrative point of view. 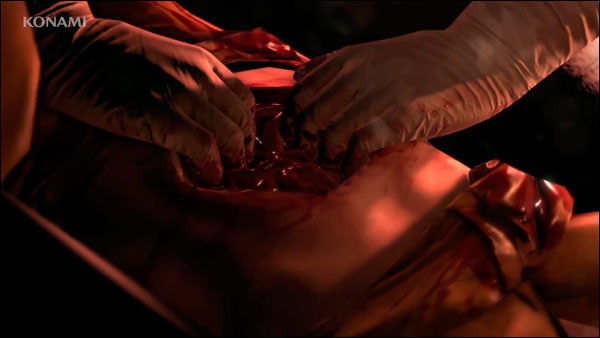 As we know, both motion and facial capture was used for the game, after which it was dubbed for the Japanese version. When working on the dub of the famous torture scene, the team was so disturbed by the scene that they began to cry. It was difficult to shoot this scene, and they were forced to take regular breaks. They were so overcome with emotions that they were also very embarrassed by it.

In Japan, this scene is somewhat censored: the camera moves away to avoid showing what is going on.

Here is a comparison of the scene in the Japanese version (on the left) and the North-American/European version (spoilers for those who haven’t played the game yet):