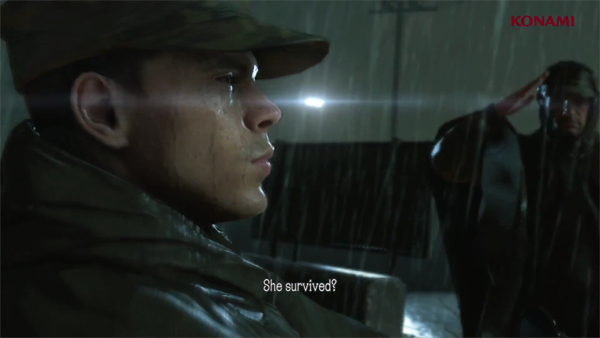 In a video released by IGN UK, Kojima comments on the entire Metal Gear Solid V: Ground Zeroes opening scene, providing some interesting behind-the-scenes information, as well as sharing some of the reasons behind certain choices.

For the opening shot Kojima initially wanted the whole camp on there, and on the sign the Konami and Kojima Productions logo which would then change to the Camp Omega logo. After discussing it with the team, the current low camera angle was decided to show off the lighting and shadows of the Fox Engine.

When Skull Face is introduced, the dogs are barking because they sense an enemy. This is done to indicate that this character is different from the regular soldiers on the base. The dogs were motion captured, as you will be able to see in the making of video. The first shot of a face is the soldier saluting when Skull Face enters the camp, this is a 3D scanned actor.

When the searchlight hits the camera, a sound effect can be heard, just as happens during gameplay. This way, the player is introduced to the sound and its meaning.

Kojima didn’t want to show Skull Face right away, but slowly reveal him instead: first you see only his back, then you see part of him in the reflection of a soldier’s goggles. Because of this, the ‘XOF’ logo he is wearing is reversed, making it look like the famous ‘FOX’ logo.

The walkman Skull Face hands to Chico was also 3D scanned, Sony lent it to the studio for them to use. The young staff members didn’t know what it was, and were surprised when Kojima told them this is what you used for listening to music back in the day. Chico was 3D scanned as well, but because he was an already existing character they had to find an actor who closely resembled him. In the end, they used four or five actors and mixed them together to create the look for Chico.

The lighting in this scene was very difficult as well, and they had a couple of people specialized in movie lighting to assist them.

The song if from Sacco & Vanzetti, a movie Kojima really likes (a cover of the song by Harry Gregson-Williams also played during the credits of MGS4). The relationship between Chico and Paz and between Snake and Kaz mirrors the relationship between the characters in the movie. There are a lot of hints in the lyrics. Kojima points out there is a part where they mention ‘victory’, which relates to the ‘V’ in MGSV. This has several meanings, which Kojima didn’t want to give away.

The motion capture during the part where everyone gets in the jeep, was really, really difficult, according to Kojima. They built something resembling a jeep for the actors to get in, but it didn’t actually move, so they had a screen showing what was happening in the game. But since not everyone could see the screen, they had to yell at the actors what part of the route they were going through.

Because the scene of the jeeps driving is one, long shot (as is the entire intro), if the player were to follow this route back, he should be able to figure out where Chico is located.

Again, the ‘XOF’ patch is seen in reverse in the mirror of the jeep, to make it look like it says ‘FOX’.

The part where the soldiers approach the helicopter was very difficult as well. Kojima wanted to have many people on screen, but because they couldn’t capture them all at the same time, they had to be done separately. So they marked the routes of each soldier to make sure they wouldn’t overlap. Because of this, the scene took them several days. Here it is revealed that it’s actually ‘XOF’ (on the side of the helicopter), and you see Skull Face’s face. But he actually doesn’t have a face.

Kojima is a fan of movies like 2001: A Space Odyssey and Blade Runner, and their use of lens flares. He also reveals that the lens flare in this specific scene (made out of rows of blocks of light) was inspired by one used by Japanese idol group AKB48.

The XOF group prepares to attack by disguising themselves, throwing out their badges. This plays a part in the story but also in the gameplay, as the player has to collect them.

The XOF badge falling down is immediately followed by the FOX patch on Snake’s suit, indicating that they are opposites, ‘like light and shadow’.

The scene of Snake climbing the cliff was inspired by The Guns of Navarone.

First you see Snake’s back, then his face is obscured by the night vision goggles. It looks kind of like Splinter Cell, until he removes his goggles, and it’s unmistakably Snake.

As Snake watches the camp, you can make out the route the camera took earlier in the scene.

The iDroid’s futuristic technology is meant to look like sci-fi elements from that era.