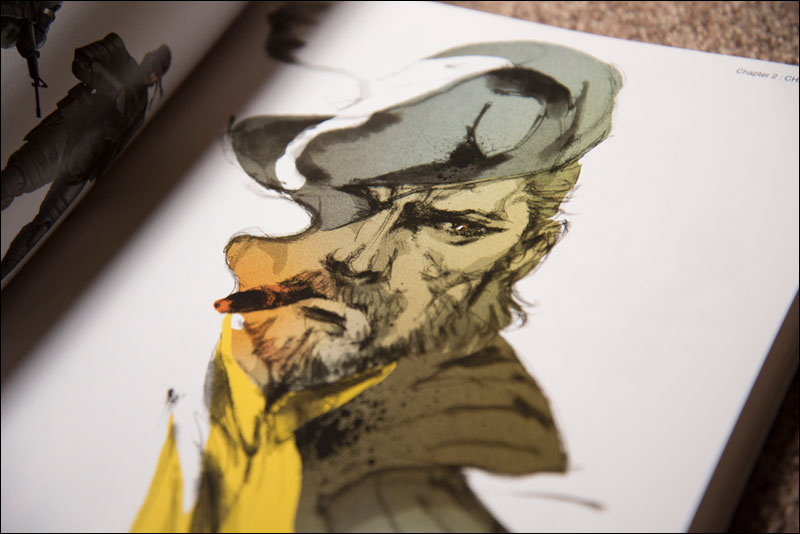 As Yoji Shinkawa is the art director of the series, the book contains mainly his work, although there is also some nice art by others, such as Ashley Wood (who contributed to the comic book style cutscenes in the game).

The book has over 200 pages, divided into 6 chapters:

Chapter 1 – Official Art: this section covers the artworks used for promotion and packaging.

Chapter 2 – Character: as the name suggests, here you can find illustrations on each of the game’s characters. What’s interesting is that it contains concept art and early sketches as well, so you can see the previous designs for some of the characters before they were finalized.

Chapter 3 – Mechanics: the mechanical designs from the game: the AI weapons, vehicles, the AI Pod and sketches.

Chapter 4 – Backgrounds: the game’s environments and locations can be found in this chapter. Mostly digital paintings, but also some CG renders and drawings of details from the environments.

Chapter 5 – Artist Demo: this looks like some sort of story board meant to give an impression of what the cutscenes were going to be like. There is also an ‘image board’, consisting of panels with rough sketches.

Chapter 6 – Other Works: miscellaneous artworks from the game, such as all the faces of the recruitable soldiers and concept art for the Monster Hunter crossover section that was included in Peace Walker.

The last few pages of the book consist of some short sections dedicated to Yoji Shinkawa himself, showing how to draw like him, and what his work space looks like.

Unfortunately, as this book was never published in the west, all the descriptions and captions for the artworks are in Japanese. Then again, there isn’t a whole lot text in there, since it’s obviously mainly about looking at the great art works. And obviously these don’t disappoint. Shinkawa is a master at his craft, as evident by his dynamic and recognizable drawings.