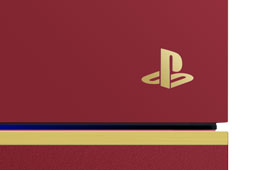 Several Japanese retailers have started taking preorders for the limited edition MGSV PlayStation 4. Konami has also announced that the Special Edition of the game will be bundled with the console. The special edition console will be sold in Japan and the Asian region. While there are currently no plans to release it in the west, you can let Sony know you want it by retweeting this.

The exact contents of the bundle are:

The bundle will be available at the same day the game launches in Japan, September 2nd, for a price of 49,980 yen (about $418USD).