In an interview by Fragged Nation, co-hosted by YongYea and Korrupt Ronin, Stefanie Joosten, the actress for the already famous sniper Quiet in Metal Gear Solid V: The Phantom Pain, talked about her role, working with Kojima and the Metal Gear series in general.

Responding to the question what she likes about Metal Gear, Stefanie said: “It’s such a legendary series, it’s really an honor to be in it.” She is really happy to be able to be part of it and sees it as a once in a lifetime chance. Stefanie played quite a lot of the earlier Metal Gear games: Metal Gear Solid 1, Metal Gear Solid 3, Metal Gear Solid 4, Peace Walker, and Ground Zeroes. Metal Gear Solid 2 she did not finish. However, she tried not to be too influenced by them when playing Quiet, because she feels Kojima was trying new things with The Phantom Pain. “Also, I think his direction may be a bit different from earlier games. But of course it was really nice to go in the backstory, and it really helped.”

So who is Stefanie’s favorite character in the Metal Gear series? Gray Fox from MGS1. “He had a really cool introduction, of course. It’s just such a sad story, it’s just a really deep character. And he was badass, of course.”

Stefanie has worked on MGSV for almost three years. Motion capture recordings are done at an early stage. “So I’m really looking forward to the release.” In the last stage the people at the studio are really working hard on the game, making long hours. Stefanie herself is done recording though. “For now I believe I’m finished.” But she can always be asked to come back if they need to add some things.

In preparation for the role, she did military training, supervised by Shinkawa and Kojima. The team has done quite a bit of training by now, so they know their military moves (Kojima included). 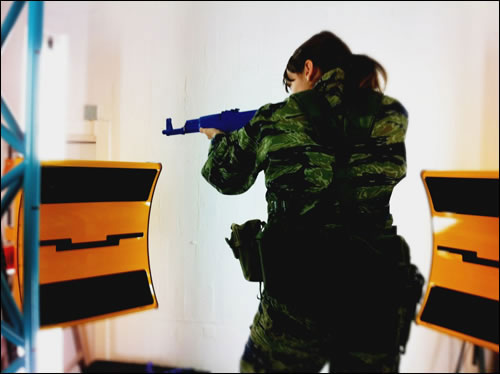 Her modeling experience helped her with the role of Quiet, since facial expressions are an important aspect of modeling photos as well. Also, when you see Quiet walk away in one of the cutscenes she is sort of walking like a model (also motion captured by Stefanie), and Stefanie said Kojima encouraged her to do the ‘model walk’. “Quiet has very nuanced ways of expressing herself. I think it will be different than what most people expect, I guess.” She also uses her humming to communicate (not Sins of the Father but a different song). 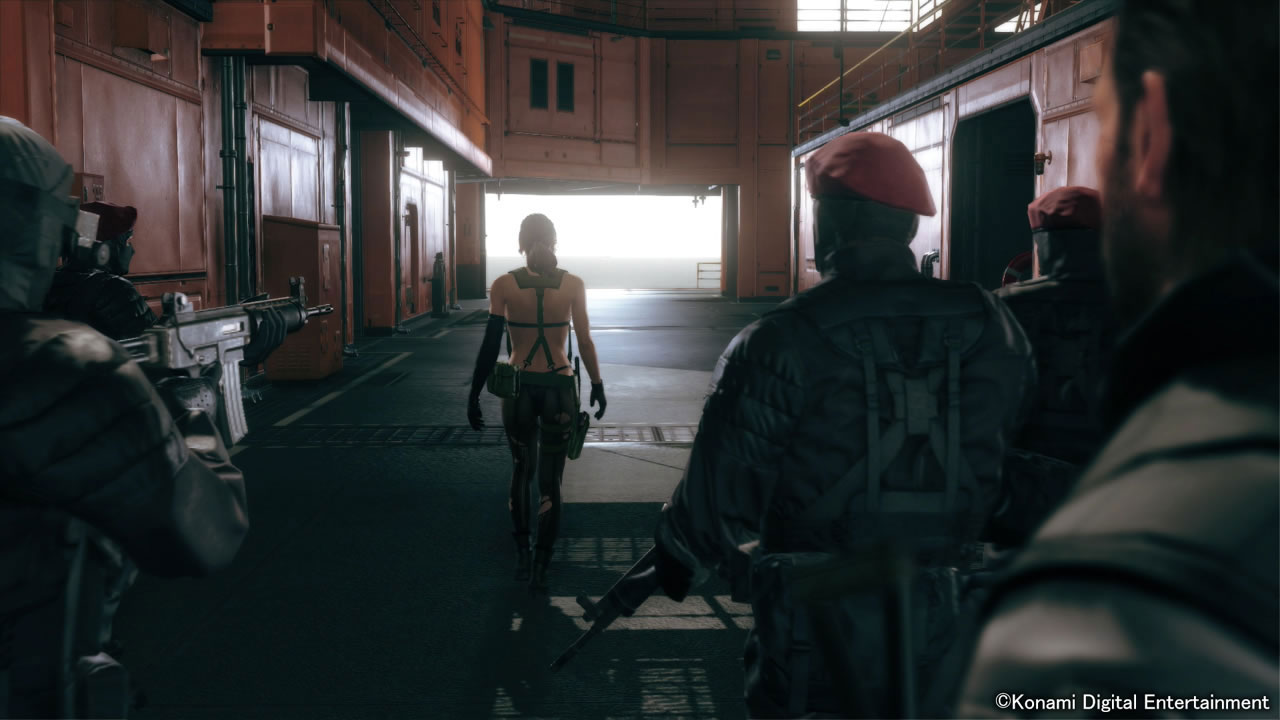 On working with Kojima, she says: “It’s very interesting.” She especially liked the motion capture, because it’s like being on a film set. The actors got the script in advance, but on set Kojima would come up with different things to try out. “Sometimes he would come up with some pretty crazy stuff.” But some of the ‘crazy stuff’ has made it through, and she thinks the result is amazing.

Talking about Quiet’s relationship with Big Boss, she said: “It’s very complicated. I think that TPP will just be a whole different experience for Metal Gear fans.” The game has a huge scale, and offers a lot of freedom in what you can do. “Al I can say: the relationship between Big Boss and Quiet, it really depends on the player. It depends on you actions and your decisions. So you’ll have to see for yourself.” The scale of her role in the story also depends on player decisions. She will remain mysterious to a degree. Players will be able to understand the character, but they will have to work for it. “It’s really deep, so you have to really look for it, I think.” You will also find out about the history between Quiet and Big Boss, but she didn’t want to spoil it. Aside from Big Boss, there will also be interaction between Quiet and other characters like Kaz and Ocelot, as seen in the trailer. “It’s a very complicated situation between the main characters and their relationship.” She says that everyone is very suspicious of Quiet (something that can already be seen in the cutscene of Quiet entering Mother Base).

So what does she like about Quiet? “She is a very strong character.” Not just because of her powers, as seen in the trailers. “She has a strong sense of pride.” Her actions show her personality. And how would she describe this personality? “At first she is very closed and kind of keeps to the background,” Stefanie explained. What we see in the gameplay trailer (when she gives a thumbs up) is when she has built up a more comfortable relationship with Big Boss.

On Quiet’s revealing attire, Stefanie said: “I’m not bothered by it.” It will make sense if you play the game, according to Stefanie.

Will there be more powers that Quiet has that haven’t been revealed yet? “I kind of think you have an impression of what she can do, but there is definitely more to it.”

She said she was amused by the whole ‘Quiet = Chico’ theory that appeared on the internet a while ago. “But as I said it in the Japanese Kojima Station, it’s not true.” She added that she thinks it’s funny that even after she denied it, people continued with the theory.

Stefanie once again noted that it will be a very dark story, and added: “You may come to hate a lot of characters as well.”