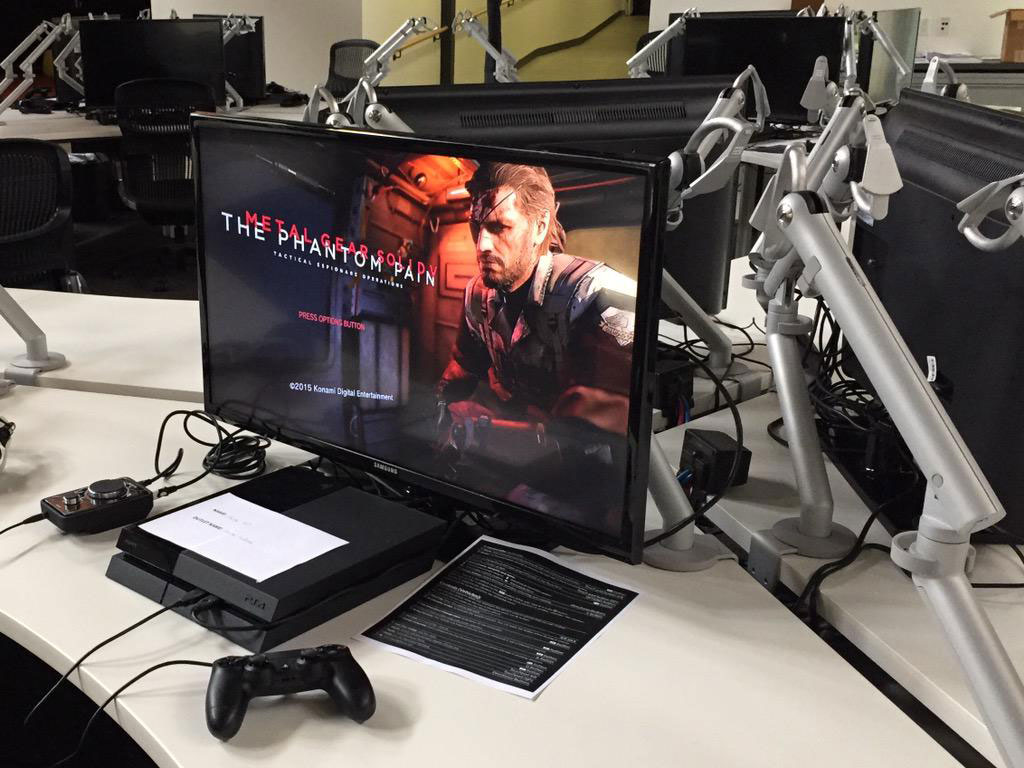 Several gaming journalists have been given the privilege of playing through some of Metal Gear Solid V: The Phantom Pain at a preview event taking place in the studio in Los Angeles. “U.S. press have 1hr window to tweet 1st impressions, to save them from bursting with contained excitement -Preview embargo lifts 9th June” – Su

Currently, GameSpot editor Peter Brown is posting some information on Twitter and encouraging people to ask questions about this mission.

Currently, I’m in the desert of Afghanistan looking for a secret weapon in caves. I can only talk about this mission today. Needless to say, Afghanistan, in the game, is far larger than ground zeroes. Once I think I’m growing tired of the desert environment, I discover a new locale, tucked away, that brightens things up.

The day/night cycle is great, and plays a big part of strategizing. The phantom cigar is weird! The mission to find the weapon takes you through massive military installations tucked away in the desert. The scale of them is daunting.

For the tweets (and to ask questions) follow the link to Peter Brown’s Twitter in the source section below. Update: Here are some of the answers he provided:

Q: Can you still tranq/cqc skulls or are they like snatchers in jamais vu where something is preventing anything but outright killing?
A: they are so strong that I wouldn’t dare try at this point.

Q: How was the weapon variety/recoil? Do the guns feel meaty?
A: There are a lot of weapons at the moment, many w/unique characteristics.

Q: How does open world MGS feel? Open world games generally have quests, stuff to explore and find.
A: Lots of that so far. Both prescribed and organic

Q: Are there any map restrictions?
A: None that I’m aware of at the moment, but I’ve been focusing on missions.

Q: These biomechanical soldiers, can you give us some more info on them? Do they talk or make noises? Any info would be great
A: They didn’t talk. They’re commanded by someone familiar, however. Can’t say more.

Q: Have you been introduced to new characters? Yes or no would do 🙂 can understand your position!
A: Yes.

Q: How has the enemy ai been?
A: A good mix, actually.

He also confirmed the biomechanical soldiers are the same seen in the E3 2013 trailer (“Those Who Don’t Exist”). “Did you know you can customize your emblem in MGSV?” – Metal Gear Official Twitter

Joe McCallister from Examiner has been tweeting about his experiences with the game as well.

I can confirm that Metal Gear Solid V: The Phantom Pain is expansive, beautiful, and a seriously deep game, almost too much to do, but…Â Not overwhelming. Been able to get mauled by a bear, recruit a decent sized PMC, and punch nearly everything.

Also dropped a crate on my horse and myself, which deserves its own trophy.

Currently tasked with taking out three unit commanders holding a meeting, question is how quiet can I be until I find out how loud I can be.

You know those games you put down then immediately want to jump back in? Got that feeling with MGSV: TPP For sure.

At certain points the environments and level design are straight up photorealistic, music and sound as always are on point So I’ve been playing Metal Gear Solid V for about 8 hours now. 😀

Obviously, I can’t talk a whole lot about it right now. But it feels like Peace Walker blown out to huge, open-world proportions.

Plus, I need to find more soldiers to “recruit” using the Fulton recovery system in order to research a new rocket launcher.

Once I do that, those tanks are as good as blown up. Or, if I were better at the game, I could always use C4. 😀

Got my trusty horse in her battle dress and we’re stomping through the afhgan mnts. Covered in blood!

Wow did I get lucky. Spontaneous dust storm covered my entrance. Soviets are clueless.

That didn’t last long… resorted to using thier anti-aircraft gun against them. Oh well.

Cover of night is the perfect way to walk away from that disaster!

Narrowly avoided any enemy heli while I was on horseback. That would have been bad.

Been hearing a puppy yelp, but can’t find it! Would love to have returned it to Mother Base.

I played 6 missions of MGS5 yesterday (8+ hours). There’s a lot to talk about. Look for a preview June 9 on @IGN. For now, I’ll say this: If MGS4 Act 1 and Peace Walker had a baby, it would be MGS5. Huge spaces to explore. Lots of resources to develop.

Hanging out with my wolf pup pal on Mother Base. He likes getting his belly scratched.

Played about 7 hours of MGSV yesterday and it feels like the giant, open map Peace Walker sequel we’ve been promised. 7 hours put me only 10 episodes into Chapter 1 of MGSV while forcing myself to basically ignore Mother Base. So much to do.

I spent yesterday playing MGSV and marveled at the little details, like overhearing Kim Wilde’s KidsInAmerica on a boom box.

Here is some information from Japanese press, translated by JunkerHQ:

The world is huge, even bigger than he expected. You can do a side op, then another, then a main mission without returning to Mother Base.

The “showering” that was talked about before did in fact refer to an actual shower room at Mother Base you can use.

Despite recent concerns, MGSV is still a Kojima game through and through. Right down to the humor.

When someone asked wether the violence will be toned down, the official Metal Gear Twitter replied as follows: “Yes, there will be blood–enough you’ll need to shower it off.” Here are some of the tweets from Spanish speaking outlets, as translated by Yong:

MGSV changes many things in the franchise, but what’s interesting is that the base that we know is still there. Evolving the base is what defines MGSV, which is what we commented in the podcasts.

I have played 8 hours of MGSV and I haven’t reached a quarter. Now I’m going to keep going, it’s very good. The embargo ends on June 9th to talk more about the game, so I will tell you more about my experiences then.

I have played 8 hours of Metal Gear Solid V: The Phantom Pain yesterday. And I will play eight more today. Wow.

The game is huge. I haven’t even passed the first area.

Mother Base is very well integrated into the game’s progress. You need it to advance, but you don’t feel obligated to build it.

For now, I have unlocked 10 missions. In the 6th one, I had to infiltrate a fort to recover a weapon. I first tried during the day, but the enemies have very good vision. At night, it’s more difficult to be detected, but there are more guards.

The game looks incredible. When you enter a dark room and then you are in sunlight, you have to adjust. The same happens if you go out to the sun.

The controls: more polished then Ground Zeroes. It is the MGS with the best controls ever. You feel like you have a lot of tools to infiltrate.

The style of gameplay is very organic.

It’s the improved version [compared to Ground Zeroes]. You have more resources, as much as level design as tools as movement.

It’d hard to get used to having so much freedom. The AI is ready and doesn’t forgive if you play carelessly.

In general terms, MGSV feels like the culmination of ideas that Kojima has spaced out throughout previous games. It’s as if MGS has always wanted to be The Phantom Pain. The open world makes all the difference.

On June 9th, the embargo for impressions will be lifted. I warn you that some things you will not believe.

The fulton system is super important for the game. You must be careful when using it. You can alert enemies!

The flow of missions is free. The dynamic is very organic. You can go back [to Mother Base] whenever you want.

The levels are very well designed. The freedom makes it more difficult to find the right approach.

There are TONS of weapons. You have to develop them first at Mother Base. Snake controls brilliantly.

Each mission gives you money. But also implicates expenses. If you ask for too much help from Mother Base, you will lose valuable resources.

About the missions: they give you a list of them and side ops. You can do them whenever you want out of order.

The day and night cycle and the freedom of the open map changes the way of approaching infiltration.

One final detail. Snake gets filled with blood during missions. You need to take a shower in Mother Base to get it off. :O

The game is incredible. After 9 hours straight, I want more.

The binoculars are VITAL. It’s very important to mark your enemies. You can do this during the day and come back at night…

The first hours are pure tension.

For now I have only played the first 8 hours, it’s a VERY DISTINCT Metal Gear from what we’ve played before.

Mother Base is incredible, when I’m on the battlefield I want to fulton everything in my way like the hoarder I am.

The Phantom Pain is like having 1000 playgrounds of Ground Zeroes, there is so much to do it burdens me.

What I’ve liked most of Phantom Pain is that with each mission, the flow is distinct, organic, and the soldiers are no longer robots.

Attack during the day or night? I recommend the darkness for infiltration, but you can barely see anything, there are some who prefer the day.

The soldiers you take to Mother Base have distinct skills, depending on their development you can obtain more toys. These toys can be: improve fulton to carry more things, improve your iDroid, unlock uniforms and weapons.

From what I have played (and the hours left) it’s definitely a strong contender for Game of the Year.

There is nothing like the adrenaline of getting your own way in Phantom Pain’s missions, no scripts, pure gameplay goodness.

In the past they were hallways, in Phantom Pain the approach is where you want, as loud or as silent as you want.

Chinese website A9VG shared the names of the missions available to the journalists (a prologue and a chapter consisting of 11 missions). While they have since been removed, you can still see the list on this screenshot. Could be considered a spoiler.

Impressions from the European press will come at a later time:

“European press invited to the #MGSVpreview event will be tweeting 1st impressions later on in the week, watch this space” – Su

More information will come when the previews arrive on June 9th, and for Metal Gear Online on June 16th. In the meantime, enjoy this new screenshot. Update: Additional impressions from European outlets.