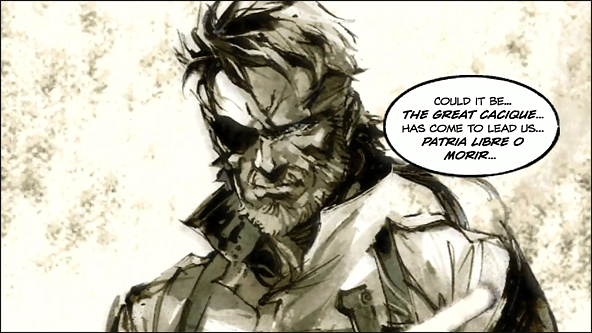 Heaven’s Divide is one of Metal Gear Solid: Peace Walker’s most prominent music tracks, and one of the few that features lyrics. It is a song that was written specifically for the game, and that has highly metaphorical, symbolic lyrics. What do those words mean exactly, and how do they relate to the storyline? This article attempts to propose a possible explanation. While attempting to interpret the lyrics as logically as possible, and giving multiple meanings where more than one option is valid, this is still an interpretation and therefor inherently subjective.

This analysis was written using knowledge of the entire series when interpreting the lines, with the use of examples directly from the games at certain points. But of course, it’s very well possible that someone else reads something quite different from them, and no interpretation is more valid than the other.

Also, it has to be noted that it is difficult to translate some of the metaphors directly to a literal meaning, but in order to arrive at an interpretation it is necessary to make things a little more concrete. Some of the lines are less explicit and clear-cut than a simple explanation can provide, so this should be kept in mind. Simplification isn’t the goal here, but a tool to make the lyrics easier to summarize, and to translate feelings and thoughts evoked by the lines into a meaning, coherent to the context of the whole.

This interpretation assumes the lyrics are written from Big Boss’s point of view, and are aimed at the Boss.

This part is pretty obvious, it refers directly to the flower field where Big Boss against his will fought – and killed – the most important person in his life, the Boss. This event would become the turning point in his life. And all the hearts once new, old and shattered now
Love can kill, love will die
Give me wings to fly
Fleeing this world so cold
I just wonder why

This part echoes his new-found bitterness as a result of his mission to kill the Boss, and finding out the truth. ‘Hearts once new’ refers to how he changed by these events, and how it embittered him (‘old and shattered now’). You can already see how Big Boss separates himself from his country and society as a whole, ‘fleeing this world’ that he can no longer relate to, and that uses soldier’s lives as carelessly as The Boss’s.

Cold as the dark
Now my words are frosted with every breath
Still the hate burns wild, growing inside this heart

Now we see a turning point: here it becomes even more clear that Big Boss’s ‘dark side’ has come out. His soul has become ‘cold and dark’, and the last sentence points towards the fact that he will actually take action at one point. It’s safe to say this refers to Outer Heaven. The ‘hate burning wild’ probably refers to his growing hatred for what happened to the Boss, and his new-found passion for his military nation.

When the wind changes course, when the stars align
I will reach out to you and leave this all behind

This sounds like it refers to Big Boss’s own death. He will ‘reach out’ to The Boss by joining her in the afterlife, and leave the real world behind.

However, it could also be something else. It could refer to Outer Heaven’s creation as well. The wind changes course – Big Boss becomes a terrorist himself. He will reach out to her, because in his eyes he is fulfilling the Boss’s will by creating Outer Heaven. And he will leave his previous life behind, the traitorous world that caused her death.

It is also possible this refers to a comment made by the Boss in MGS3: “The foibles of politics and the march of time can turn friends into enemies just as easily as the wind changes.” The metaphor for a changing wind refering to changing enemies is used here as well, but this time it’s for Big Boss, whose former country now becomes his enemy.

This can, and probably does have multiple meanings. Heavens divide immediately brings to mind Big Boss’s military nation ‘Outer Heaven’. The division between Zero’s ‘heaven’ (The Patriots) and Big Boss’s ‘heaven’, meaning their ideals, their ways of interpreting the Boss’s will. The war between Zero and Big Boss. It could also refer to the Boss’s death again, when the two must part ways.

Big Boss has to choose between The Patriots and Outer Heaven.

It could possibly refer to Outer Heaven opposing the almighty Patriot organization, despite their nuclear capabilities an unequal battle. When leading MSF and Outer Heaven, Big Boss fights alongside minorities who are opposing a mightier enemy. The last phrase possibly refers to the fact that Big Boss is an icon for many of the people he encounters and aids (Saladin for Sniper Wolf, Che Guevara for Amanda, Naomi’s ‘benefactor’, and he is also being used as an icon by Zero). In this way, he could be a sign of hope that shines through their doubts and fears. Do you feel the storm approach as the end draws near

The storm that is approaching is the war between Zero and Big Boss, which will result in his death.

When heavens divide
Time will come to softly lay me down
Then I can see a face that I long to see
And for you, only you I would give anything
Leaving a trace for love to find a way

This sounds like it refers to Big Boss’s death again, after which he will meet The Boss again in the afterlife. He would give everything for her, including his life.

This segment has a darker tone to it again. Big Boss will dive into the fire, he will create Outer Heaven and fight a relentless war against Zero. He will use his power as leader of a military nation to spread conflict around the globe. The man will become a symbol, his name ‘scorched into the sky’. In short, the song covers Big Boss’ life after The Boss’ death in chronological order.  Looking at the overall structure, you can roughly discern those parts: Big Boss kills the Boss, is embittered by this and by the way the world doesn’t seem to care, turns his back on his former country, fights alongside minorities and becomes their hope against greater opponents, and faces death after which he can get closer to the Boss again, leaving behind a dark legacy.