Geoff Keighley has announced via Twitter that Hideo Kojima will receive the Industry Icon Award at this year’s Game Awards on December 1st. Kojima was prohibited from attending last year’s award ceremony by Konami’s lawyers, resulting in him not being able to accepts MGSV’s awards. But now that he is no longer under Konami’s contract, he’ll be able to attend the show and receive his award. 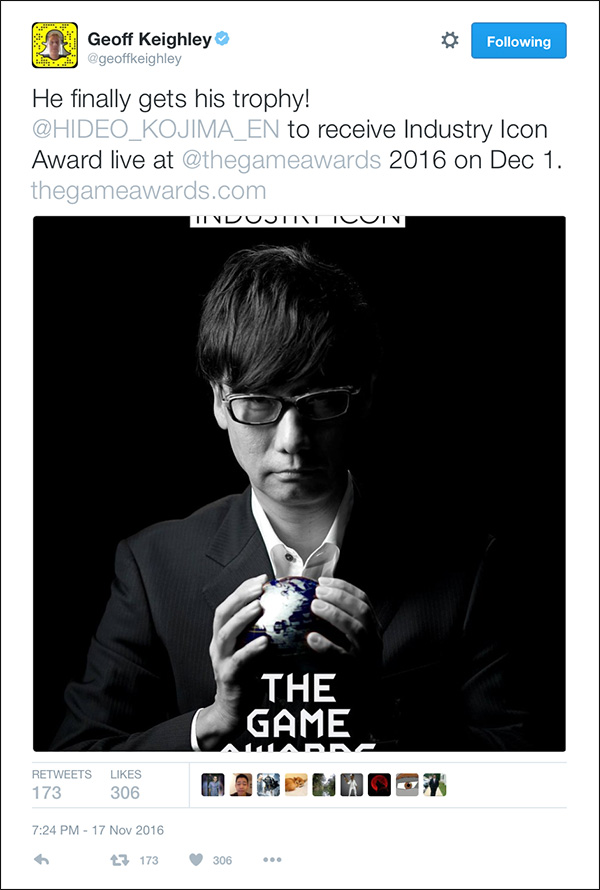 On the heels of the nominees announcement for The Game Awards 2016, organizers for the game industry’s biggest celebration today announced that its highest honor, the “Industry Icon Award,” will be presented to legendary game creator Hideo Kojima. Kojima will attend the live ceremony on December 1, 2016 at the Microsoft Theater in Los Angeles to receive the award.

Kojima, known for his work creating the “Metal Gear Solid” series, was unable to attend the 2015 ceremony, where his latest game, “Metal Gear Solid V,” was nominated and won the award for “Best Action/Adventure Game.” His studio, Kojima Productions, is currently working on its next project, “Death Stranding,” starring Norman Reedus.

“Hideo Kojima is one of our industry’s most accomplished and innovative storytellers,” said Geoff Keighley, creator of The Game Awards. “When we started work on this year’s Game Awards, my first priority was to make sure we honor him properly in front of his peers and fans.”

The Industry Icon award recognizes individuals who have made an inedible impact on the video game medium. Past recipients include Ken and Roberta Williams (founders of Sierra Entertainment, which published “King’s Quest” and “Leisure Suit Larry”), and Bretty Sperry and Louis Castle(founders of Westwood Studios (Command & Conquer, Red Alert).

One of the most important things I wanted to do this year was give @HIDEO_KOJIMA_EN the stage moment he was robbed of last year.

Very happy he will join us live as we pay tribute to his incredible career so far. 2 weeks to show!