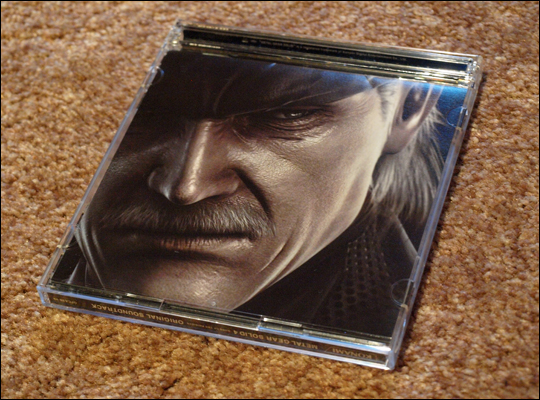 A Look at the Best Video Game Soundtrack Ever

This is the complete soundtrack of Metal Gear Solid 4: Guns of the Patriots. The PAL Collector’s Edition also comes with an OST, but it’s only a small selection of tracks. This is the whole thing, divided over two cds.

The OST contains 47 tracks, which translates to 2,3 hours of music. The front of the CD case. The contents: two cds and a booklet. Part of the tracklist in the booklet.

Here is my personal top 10:

A sorrowful track that echoes regret, painful memories, and the mistakes of a generation, but also a glimmer of hope for the future. It also carries a bittersweet enclosure. It starts softly, grows stronger, after which it seems to die off, but then it softly starts anew, like Solid Snake is going to live his final days in Big Boss’s place. It is a track of sadness and regret, but also of atonement and new hope.

A remix of the Metal Gear Solid 3 Main Theme, taking you back through memory lane, reflecting on 50 years of experiences and trials, all culminating into one all-ending fight. It settles everything.

Probably the darkest track on the OST. Slow, gloomy, despairing, hopeless, thanks to the organ music. The track is called Sorrow for a reason.

Starting with a quiet guitar riff that is based on Naomi’s theme from The Twin Snakes, the song then changes into a slow subdued tones, until it all of a sudden explodes into a dramatic piece, before almost completely dying off. This pattern repeats itself, until the end, when a determined part that includes electric guitars closes it off.

Guns of the Patriots

Epic ‘in your face’ build up, that comes to a conclusion three times. Loud drums accentuate the increasing pace and growing threat.

A track with a dark undertone, which underlines the world The Patriot system has created, existing of cycles of battle. Followed by a more fast paced drum beat, and at the end a chorus that brings it to a conclusion.

The perfect track to underline the dramatic volta, sad in a quiet way. A feeling of death and despair.

The high pitched guitar riff contrasts with the low, ominous background music. The whole track is very slow paced and withheld, until the end when it becomes more bombastic.

A soft, calm track with a piano and guitar and a soothing, peaceful melody.

This is a bold statement, but for us this OST is the singe best soundtrack in a video game, because it is filled with amazing, diverse music. Father & Son is probably my favorite video game song altogether. We have heard this track numerous times and it’s still not getting old.

Our only complaint with this CD would be that not every single Metal Gear Solid 4 song is on there (where is the MGS4 version of Enclosure?). We don’t really see a reason to not include them all, since this is supposed to be a complete collection. But even with this in mind, this is easily our favorite video game soundtrack, for all the fantastic music it does have. Some artwork in the booklet.