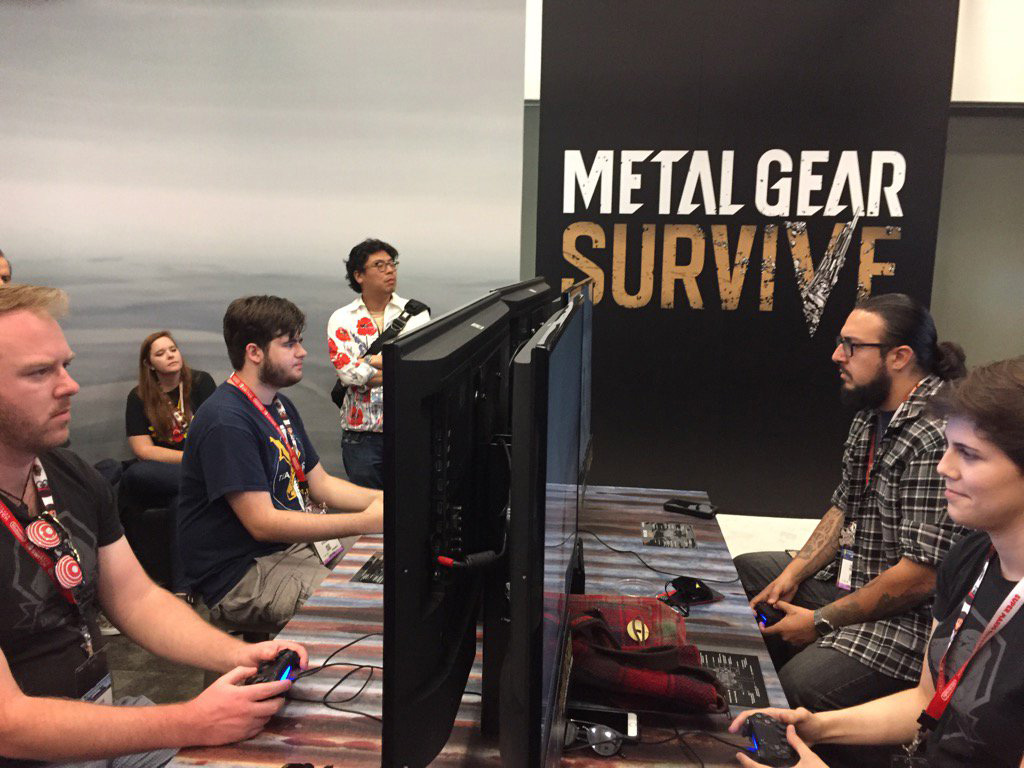 Metal Gear Informer was invited by Konami to try out Metal Gear Survive at E3 2017. Carlos Fregoso (aka crimsonfox) played the game for about 20 minutes and walked away more pleasantly surprised than he expected. Check out his impressions below.

With everything that’s happened with the Metal Gear brand the last couple of years, It’s hard to accept what’s going on at Konami and what’s happening with Metal Gear Solid as a franchise. When Metal Gear Survive was announced at Gamescom 2016, like pretty much everyone else I was wondering what the hell the thought process was – and how Konami came up with Survive as a solution. After playing Survive’s 4 player co-op mode I think I understand it a bit more. Like I said in my review of MGSV when it released (along with everyone else that played it, for that matter) the gameplay is solid. With Survive the team have built upon it in a new way. The control scheme has changed up a bit to fit with the new mechanics as well. In the co-op mode you basically fight waves of zombies while defending a worm hole generator. You defend the generator and yourself by building fences and walls of sand bags. Setting traps like the now classic Fulton Recovery Device and shock mines that stun zombies in groups or on their own long enough for you to put them down. You can craft more items such as turrets and big slippery mats that make zombies trip up and slow down for better crowd control when the game gets too chaotic. As you complete rounds you get side ops that pop up where you can collect resources like metal and wood to craft more defenses and even be rewarded with D-Walkers equipped to mow down the hoards. While trying to be fair and unbiased I actually found myself enjoying this mode and the revamped melee combat. Now close range weapons have reticles that you can use to aim at the heads and legs of the zombies to do the desired damage. There are weapons you can swing at medium range, heavy weapons and super heavy weapons that you can use together in combos once you learn how to utilize them.

The enemies also have a nice variety, and trying to juggle them all when they all group up is a good balancing act. Some variants are big walking blobs that explode when they die and some have heavy armor that require more explosive weaponry to take down. I can imagine playing this game with friends and really enjoying it after a few rounds of getting used to it. The crafting of weapons and equipment is a cool addition to the game as well. You craft items using resources collected from breaking boxes and earned through short side ops in between rounds. If Konami would have released this as a new IP I think many more people would be more for it. The co-op portion of Survive is definitely worth checking out, especially if you enjoy experiences like the Call of Duty Zombie mode, the Hoard mode in Gears of War or co-op experiences in general. The real big decider will be the campaign in SURVIVE. No additional details on this mode were revealed, although it was said there’d be “more info soon”. For what it is and what we’ve seen so far, SURVIVE is good co-op experience that adds something different to the amazing MGSV gameplay we all love.

I’m left more interested in SURVIVE as a whole after playing this portion of the game. Let’s hope Konami keeps the vibe fun and over the top and don’t try to make the story too serious or deep. If we accept it as what it is, a silly spin off survival mode, I think people will enjoy it. It won’t change your life, but it’s definitely better than I ever expected it to be. Metal Gear Survive will release early 2018 for PC, Xbox One and PS4.