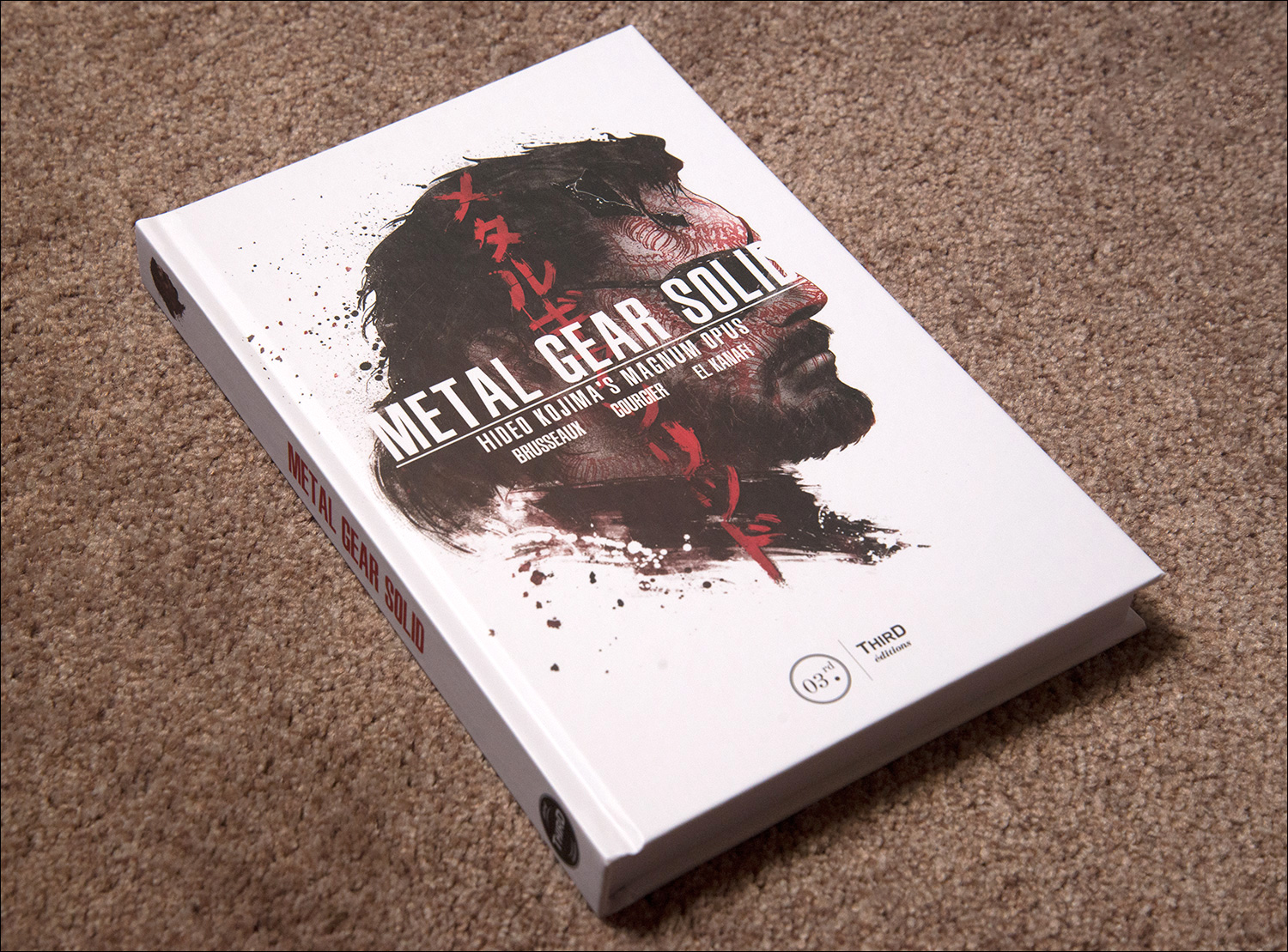 In the last couple of years, French publisher Third Edition Books released a couple of well received books on famous video game franchises. The books were originally only in French, but after a successful Kickstarter campaign, they were translated into English for an international audience. Among them is a Metal Gear book, titled Metal Gear Solid: Hideo Kojima’s Magnum Opus. There were two versions available: a regular one and a collector’s edition, which is the one featured in this article. It comes in a dust jacket featuring an alternative art of Snake’s bionic arm from MGSV. The normal version of the book has this artwork on the cover, while the collector’s edition has an artwork of Venom Snake.

In its most simple terms, this book can be described as an Metal Gear encyclopedia. It looks at the series from all angles, talking about the games in the context of the game industry at the time, Kojima’s personal drives and ambitions, diving deeply into the games themselves and its various aspects and broader meanings. It’s a very complete overview that spans from the formation of Konami to the recent events of Kojima’s new game Death Stranding. It not only talks about the main canon games but also its various spin off and adaptations into other media. And it contains some more subjective interpretations and reflections.

So let’s have a look at the book’s various chapters. The book has 8 main chapters divided over 249 pages.

After a foreword and an introduction of the authors, the book begins with the genesis of Metal Gear: Konami, followed by a biography of Hideo Kojima. Both are well researched pieces to contains many interesting details that ensure even the most knowledgeable Metal Gear fans will find something new.

The next chapter dives into the games, and how each installment came to be.

The book also contains an extensive, 150 page recap of the entire story in chronological order, an impressive feat in its own right.

The fifth chapter looks at the content of each of the games in a more in depth way.

Then there’s a chapter looking at the non-canon parts of the Metal Gear franchise, from the NES game to the Metal Gear Arcade game and Metal Gear Rising. These paragraphs are a bit more concise which makes sense as they are not as much representative of Kojima’s artistic vision.

The chapter that follows looks at the various elements that play a role in the series, such as Kojima’s frequent breaking of the fourth wall, his search for a balance between gameplay and cutscenes, and his tendency to mislead the player, during the games but also during the production and the marketing phases. It also talks briefly about the games’ themes and humor.

Chapter VIII focuses on the music in the series, presented in chronological order so you get a nice ‘timeline’ of the various soundtracks and its influences.

Lastly there’s a few pages of closing words, followed by acknowledgments of the people who helped make the book a reality.

All in all this is a very interesting read for Metal Gear fans. Obviously for the most learned fans there’s a lot that isn’t particularly new, but the amount of research and care that went into each chapter cannot be denied. One thing that’s a bit disappointing is a slight lack of in depth analyses. Some significant themes are only brushed over and parts of the later chapters feel more like the writers’ personal opinions than analyses. While interpretations are always subjective it feels like more could have been said about the games’ deeper meanings and themes. Nevertheless, there is food for thoughts and some intriguing ways of looking and interpreting certain elements make it a worthwhile read. A recommended encyclopedia for fans.

You can purchase the book from the Third Editions website.