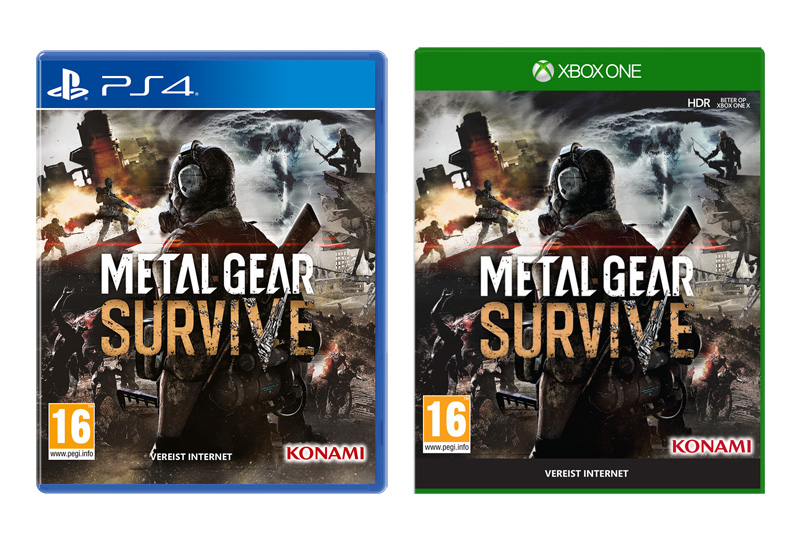 Konami has released the final pack shot for Metal Gear Survive, and it tells us a few things. First of all, it confirms the game requires an internet connection to play, something that was rumored a few months ago when mention of this appeared on the official website. Because it did not specify whether this was about the online co-op mode, or the game as a whole, we tried to get confirmation from Konami but they weren’t able to provide an answer. But with the release of this pack shot it does seem that not just the co-op, but the entire game requires an internet connection, and is essentially an always online game. This probably has to do with the fact that your progress carries over between both modes. Secondly, it seems that PEGI (Pan European Game Information), the organization that rates games in Europe much like the ESRB in the US, has established a final age rating, and it’s actually lower than their provisional rating. They gave the game a rating of 16 and up, which is lower than the 18+ rating for MGSV or the Mature rating of the ESRB.

Lastly, the Xbox One pack shot confirms HDR support and some sort of enhancements on Xbox One X, the high specced system Microsoft released in November of last year. Those who played MGSV at launch may remember the annoying server issues that caused the game’s menu to become drastically slower, so having a game require you to be online is kind of worrying. On the other hand, the servers probably won’t be as overloaded as with that game. We will see how things go for the beta when it starts later this month.