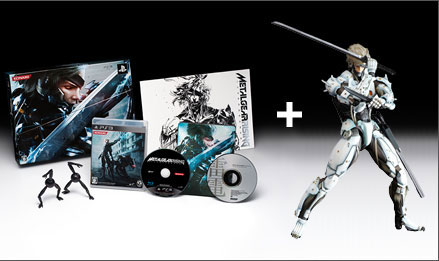 Konami has released some more promotional images of both Metal Gear Rising Revengeance Premium Packs that will release in Japan next year. Both bundles include a soundtrack cd, an artbook, the game, a steelbook, a box with a render of Raiden on it and two magnetic Dwarf Gekko figurines, and some DLC. The difference is the White Raiden action figure that comes with the more expensive set. On these new pictures you can see all the contents, except of course the downloadable stuff (which includes the Gray Fox skin).