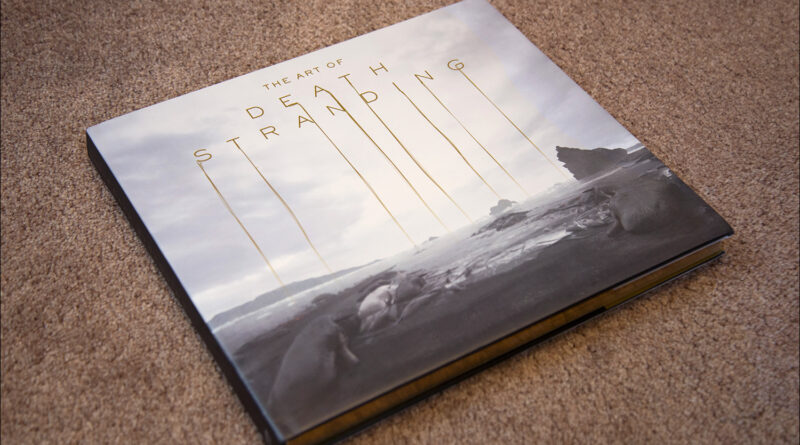 First announced in August of 2019, The Art of Death Stranding is a large hardback book published by Titan Books, containing concept and promotional artwork from the game.

The dust jacket features the famous beach from the game, littered with stranded sea creatures, and overlaid with the title in golden lettering.

The gold color is likely meant as a reference to the chiralium found in the game, and is repeated on the back as well as throughout the book itself. The pages of the book also have gilded edges, giving the item a premium feel. The spine is solid black with the title on it.

There are 256 pages divided over two parts: Characters and Locations. It includes early concepts, sketches and double page spreads in colour, accompanied by explanatory notes. Aside from those found in the game, there are also illustrations of unused characters, equipment and locations, which is always interesting to see. One example of such unused concept is a hot rod inspired car, and early sketches showing a very different looking Die-Hardman. But the full page illustrations of some of the striking locations from the game, like Amelie’s Beach are a sight to behold as well.

In conclusion, this is a great item for fans of the game looking to learn a bit more about the process of shaping its characters and world, as well as those who just want to admire the great artworks by Yoji Shinkawa and others. Considering its size and comprehensiveness, the price is pretty good as well.

The book is available from various webstores, like Forbidden Planet (Europe) or Amazon (US), among others.

Official Licensed PlayStation Product
ISBN: 9781789091564
A copy of the book was provided to us by the publisher.
This article contains affiliate links.