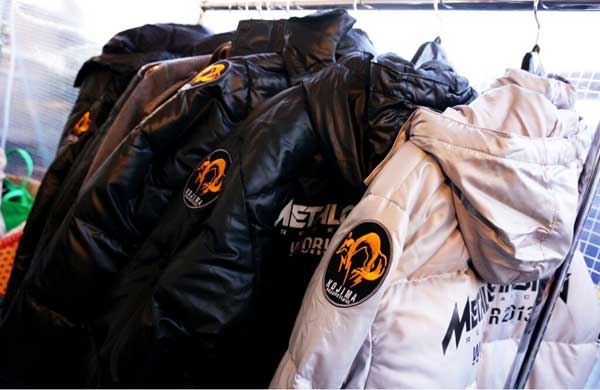 Today Kojima Productions organized an event in Japan in anticipation of the release of Metal Gear Rising Revengeance. Here are some photos of the event. Kojima commented that it was quite cold, but at least there were some special made warm jackets to wear: There were talks by the producers and game developers about the game, and about coming merchandise. The voice actor for Snake also appeared on stage, and his voice will feature in some of the downloadable VR missions that will be released later.

Perhaps the most interesting part for non Japanese Metal Gear fans: the reveal of the locations that Kojima and Shinkawa and the producers of the game will visit during the world tour, including the dates: As you can see, among the countries to be visited are France, Italy, Spain, Germany, the United States, the UK, Mexico, Japan and Argentina. As stated a while ago, the American countries will be visited by the producers (Inaba and Korekado), and Kojima and Shinkawa will head for Europe. More precise information will surely follow.

Views: 711
Liked it? Take a second to support MGI on Patreon!