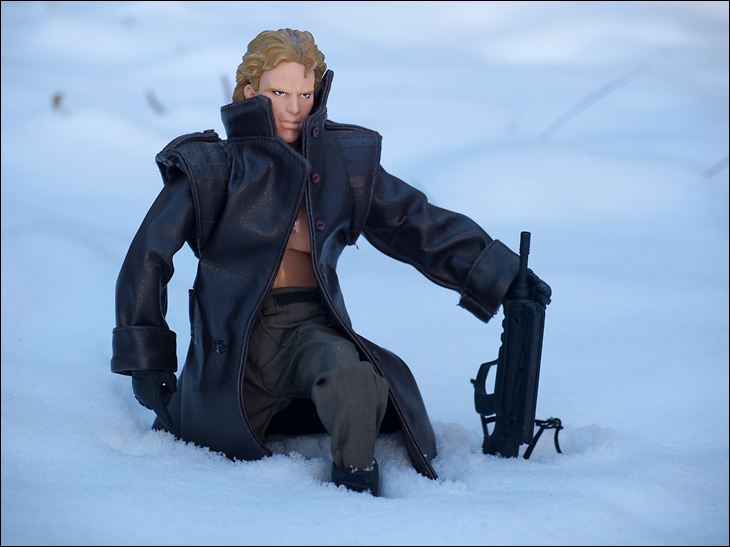 This is a special line of very articulated and detailed Metal Gear Solid action figures, called Konami Doll Collection. There are several available, all from the cast of the original Metal Gear Solid: Solid Snake, Liquid Snake, Sniper Wolf and Meryl. They were made in 2002 by a company named Yamato, and now they have become collector’s items that garner high prices on eBay. These are pretty cool figures for various reasons. First of all, they are fairly large, at about 12”. They are also very articulated, meaning you can put them in all kind of different poses. Furthermore, they are made with a lot of attention to detail. This is what the box looks like. On the back is a short biography of Liquid Snake, together with some artwork. Liquid Snake comes with a FAMAS assault rifle (the one he uses at the end of the game when chasing Snake), including an extra magazine that can be removed from the gun, his iconic brown trench coat, two dog tags and a walkie-talkie that he can carry around his waist (which also appears in the game). The gun can also be strapped to Liquid’s body, or placed on the ground using two retractable stands. One of the best things about this action figure is the sheer attention to detail. To name a few things: His face is complete with the famous arrogant smirk, the leather coat has real buttons and stitches, he has two actual metal dog tags dangling around his neck. His pants are made of real fabric and his belt has an actual miniature buckle. One thing that is a bit of a shame is that the doll is very unbalanced, which makes it difficult to put it in a position without Liquid falling over. The top is heavier than the legs, so they can rarely carry him. Also, because his right finger is always pointing, you can’t really do too much with this in terms of poses. Another thing to note is that Liquid looks great in his trench coat, but when you remove it he looks kind of silly. The upper body is too thin and small in comparison to his head, and his elbows don’t resemble human ones. This was meant to look like Liquid’s death scene in the game, but it actually looks like he’s seeing snow for the first time in his life.

Because of all the tiny details it isn’t the most sturdy action figure either. One of the stands of the rifle got loose, and it’s hard to get it back together again. But as long as you display him somewhere safe, this shouldn’t be a big problem. All in all this is a great action figure, because it doesn’t look like it was thrown together cheaply like most other statues. The fact that many parts are made out of ‘real’ material helps a lot in bringing the statue to life and making him look authentic to his ingame counterpart.