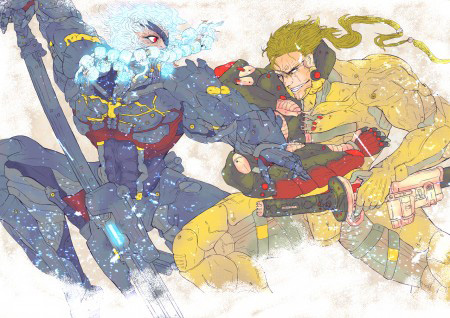 Platinum Games has announced the winners of the Metal Gear Rising art competition held in Japan. The grand prize winner is the impressive piece of art work posted below (to see the full size version visit the PG site by clicking the image). To see the rest of the winning drawings, visit this link.

In a video on the Platinum Games site, the selected pieces of art were shown, and the winners were rewarded with different goodies.

The next category (special award) included four drawings. Winners received a pamphlet, a hoodie, soundtrack cd, a t-shirt and a pamphlet.

The winner of the third category (Platinum Award) will receive different Platinum goodies.

Shinkawa himself selected the winners for the Yoji Shinkawa Award. There was one more prize: the Grand Prize. The artist who won this category receives a framed poster autographed by Yoji Shinkawa, a soundtrack cd and a limited edition Metal Gear Rising Wired watch.

You can watch the whole video here.