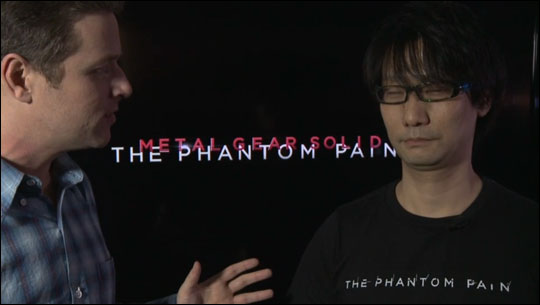 After the reveal of Metal Gear Solid V: The Phantom Pain at GDC 2013, Geoff Keighley conducted a lengthy interview with Hideo Kojima. You can find the video interview here, or a written summary below. First, Keighley asked about the mysterious reveal using the Moby Dick Studio and Joakim Mogren character, and why it was done this way. Kojima answered that the first reason behind this was that they wanted to do something interesting. But they also wanted to reveal the trailer without saying it was Metal Gear, so they could see how well the Fox Engine would be received without the big name of this famous series attached to it, so just based on the visuals alone. They did know people would figure out what it was, this was intentional.

As for the Joakim Mogren interview on GTTV, Kojima actually wanted to act as Mogren himself but he was busy so they used a Swedish guy instead. Moby Dick Studios is just Kojima Productions Japan, although Kojima would like to have a studio in Sweden.

Commenting on the structure of the game, Kojima explained that Ground Zeroes is a prologue, and takes place 9 years before The Phantom Pain. Put together they comprise MGSV. The Phantom Pain is the main part of the game, and it will be a huge game, according to Kojima. He couldn’t comment on how the two parts will be distributed, but they are in fact two parts of a whole.

As for the point on the timeline: Ground Zeroes takes place almost immediately after Peace Walker, and Phantom Pain 9 years later, roughly around 1984. Keighley asked about the decision not to use David Hayter as the voice actor for Snake. Kojima explained that this is a new type of Metal Gear game, and they wanted to have this reflected in the voice actor as well.

Keighley asked about the third person in the hospital, when Big Boss slips into a coma, and through whose eyes we see the scene unfold. Hideo Kojima laughed and said this person is he himself.

Kojima explained that  the new unit, Diamond Dogs, has many different meanings behind its name. One of them is a reference to a David Bowie album. It also refers to the term Dog of War, but at the same time they have their pride (which is reflected in the Diamond part). The ‘horn’ Big Boss has on his head in the final scene of the trailer, is actually debris and bone embedded in his skull. In this scene Big Boss also has a bionic arm,  with which the player will be able to do different things in the game.

The game will have familiar faces from the saga, but there will also be many new characters, that Shinkawa has been working on. They will be a different taste from what he has done in the past.

The style of the gameplay is a real open world, and realistic infiltration. You figure out when you are going to the area you want to sneak in, how you’re going to get there. Maybe you will sidetrack into a sidemission along the way, which changes your strategy. Many options are available to the player, as the game will feature completely free design.

The time the player decides to take on the mission affects the situation. During the night, there may be less guards, but your vision will also be more restricted and you may have to use jeeps (because of their headlights) or a flash light, which makes it easier to get caught. It’s up to the player to decide the best strategy.

Fox Engine is not just about graphics, it’s mainly about the changing the way games are created at Kojima Productions. It will make game design more efficient, so time can be shifted from creating assets to actual game design. Keighley asked about the title of the game: why the change from numbers to roman numerals? Kojima answered that they want to reinvent the series, and shifting from 5 to V represents their will for victory. The V here stands for victory.

Keighley asked what the theme or the message for this new Metal Gear game will be. Kojima answered that he has had a theme for the game in his mind since the beginning, but he can’t reveal it just yet. Metal Gear has always had an anti-war message, and was also about what to pass on to the next generation. MGS1 had Gene, MGS2 Meme, MGS3 Scene, MGS4 Sense and PW Peace. Kojima didn’t want to say what the theme for MGSV will be, but he did say it is a very heavy theme.

You will play the entire game as one character (Big Boss).

Keighley asked about the hallucinatory elements we saw in the Phantom Pain trailer, such as the whale and the flaming unicorn. In the game there will be a balance between real, and little bit of supernatural. But it will be primarily realistic. The ratio will probably be around 80% real, 20% sci-fi and supernatural elements. Kojima Productions Japan and Los Angeles are not working on the same title, and Kojima would prefer to have the two studios work on different things, and compete against each other.

How much has the game changed since its inception, Keighley asked. According to Kojima, it has not changed very much. Initially some people on the team were opposed to making MGS an open world game, but now they are all on the same page.

Keighley commented on the very impressive looking graphics seen in the MGSV trailer, and asked if we can expect to see the game on next gen platforms such as the PlayStation 4. Kojima said he couldn’t comment on this. He did say that the game was running on a PC, but targeting current gen hardware (Xbox 360 and PlayStation 3). On these platforms, it will look very close to what they have shown.

As a final note to the fans, Kojima stated MGSV is going to be a very different experience from other MGS games, but he said it’s a lot of fun, it’s something different, and this is what he wants to create.

Views: 892
Liked it? Take a second to support MGI on Patreon!