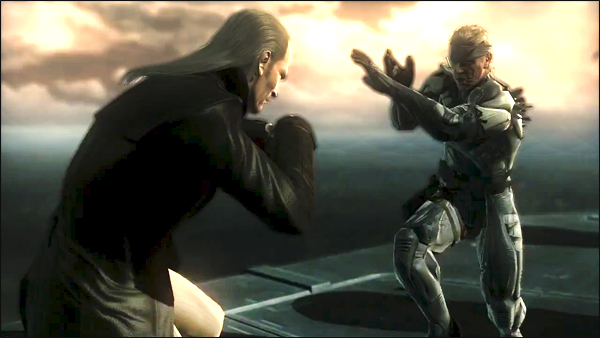 Boss battles are common in gaming. Nearly every story driven game has them, and they often serve as a climax for (certain parts of) the game. They are also integral to the Metal Gear Solid games, which feature some of the most unique, memorable and intense fights gaming has to offer. But what are the most outstanding boss battles in the franchise? Of course, with the countless enemies the player fought over the years, there are many more boss battles to consider, but here are five of the best.

For the first time in the history of the series, players were able to control a Metal Gear themselves, and none other than REX, probably the most legendary and beloved version out of all of them. Not only that, but they had to take on another famous Metal Gear: RAY. REX vs RAY, Snake versus Liquid, on the shores of Shadow Moses. REX has the ability to launch missiles, fire his rotary canons, shoot a laser beam, or the two mechanical giants can get up close and personal to bash each other’s metal heads in. It almost feels like a brawl between two beasts, or dinosaurs.

Buildings and structures are completely destroyed as the two enormous machines tramp across the harbor and blast their weapons in each other’s direction. The metallic clanks mix with echoing yells when the mechs clash in a melee attack. A very entertaining fight that’s quite different from the other battles in the series.

Remember taking out one Metal Gear? How about a whole battalion of them? As if one Metal Gear isn’t imposing enough, at one point in the game Raiden has to take on an entire army of those things. Luckily they are the inferior, unmanned versions, but this still proves to be no easy task. Equipped with a Stinger missile launcher, Raiden tries to hold back machine after machine stepping onto the stage, towering above him. By shooting their legs he can cripple them for a short while, after which a shot to their metal heads is the most effective way to destroy them. But Raiden cannot cope with the overwhelming amount of them, and this boss battle doesn’t end with a victory, but with the protagonist giving up.

It’s an exhausting fight against all odds, and you don’t get a moment of rest as a new Metal Gear replaces a destroyed one as soon as it has been defeated. Raiden may not have been able to win the fight, but he still has something to brag about.

This is the fight the entirety of Metal Gear Solid 3 has been building up to. The Boss has been defeating Snake consistently throughout the game whenever they battled, but Snake has been growing physically and spiritually over the course of the mission.

The fight takes place in a lakeside field covered in white flowers waving in the wind. The Boss’s white uniform blends in, and she will try to sneak up on you and take you down using CQC. Kojima once stated he actually wanted players to dress Snake in the black uniform for symbolic reasons, but this wouldn’t make it any easier for the player to sneak up on The Boss. Here is one tactic he can use: make sure The Boss loses sight of him using the environment and his camouflage abilities, and surprise her from an unknown position. The player can also use the heat visor to locate her, or counter her CQC when she attacks, but this is rather difficult. Before the fight starts, The Boss initiated a ten minute timer, after which MiGs will come ‘and bomb the hell out of this place’. “Let’s make this the greatest ten minutes of our lives, Jack.” At first there’s no music, you only hear the howling of the wind and the sounds of the battle. But when the end of the countdown draws near, an instrumental version of the famous Snake Eater theme starts to play.

There’s a distinct atmosphere to the fight. There seems to be no hostility, but instead some sort of harmony. The game has been leading up to this moment, and Snake has prepared himself for it. Now it’s just there. But that doesn’t mean it’s an easy fight. The Boss is a fierce opponent and she doesn’t hold back. You will have to be careful, but at the same time be fast enough not to get bombed into oblivion. The first line of the game’s title song probably describes it best: What a thrill!

This fight is the epic finale between Liquid and Solid’s struggle. With the system – and the technology it provided – shut down, it now comes down to a raw hand to hand fight. It is a fight in beat ’em up style, with the two characters facing each other while being able to move around the deck. Fighting on top of a submarine in the middle of the ocean, with an orange sunset bathing everything in a golden glow, this fight takes the player through the entire series. First you will hear Metal Gear Solid’s ‘Duel’ music, and the health bars of the characters resemble those from the original game. After dealing a certain amount of damage, it switches to Metal Gear Solid 2’ Tanker Incident Music. Get through this part successfully, and the health bars from Metal Gear Solid 3 will appear, with the respective game’s ‘Snake Eater’ theme playing in the back. And finally, for the last part of the battle, the ‘Old Snake’ track from Metal Gear Solid 4 will play. With each new section, Liquid will change his fighting style in accordance to the associated game. In the conclusive segment of the fight, there are no health bars, and the two exhausted, beaten up men throw ever heavier punches at each other with their last remaining strength. Win this fight, and you have not only reached the end of this intense battle, but of the game as well.

You can also use the environment to your advantage, by grabbing Liquid’s head and banging it against an iron pole. Don’t forget to let Liquid grab Snake in a chokehold and see what happens.

It’s been 14 years since Metal Gear Solid came out, and this may still be the most original boss fight in gaming history. Psycho Mantis is a practitioner of telekinesis and mind reading, and during this fight he uses his exceptional skills to mess not only with Snake, but also with the player controlling him. First he demonstrates his telekinetic powers by moving the controller using the rumble feature. Then he reads the player’s mind and tells him what games he’s been playing, by checking the memory card inserted into the console. During the fight Mantis’ tricks consist of clearing the screen (making the player think he accidentally hit the remote), taking over Meryl’s body and making her shoot Snake or herself, and hurling objects at Snake using his telekinesis.

There’s only one way to beat the guy: switch controller ports. By inserting the controller into the second socket of the console, Mantis won’t be able to predict your movements anymore.

This is a boss fight people still talk about, brought to life by clever ‘out of the box’ game design, making it stand apart from standard fights people were used to.