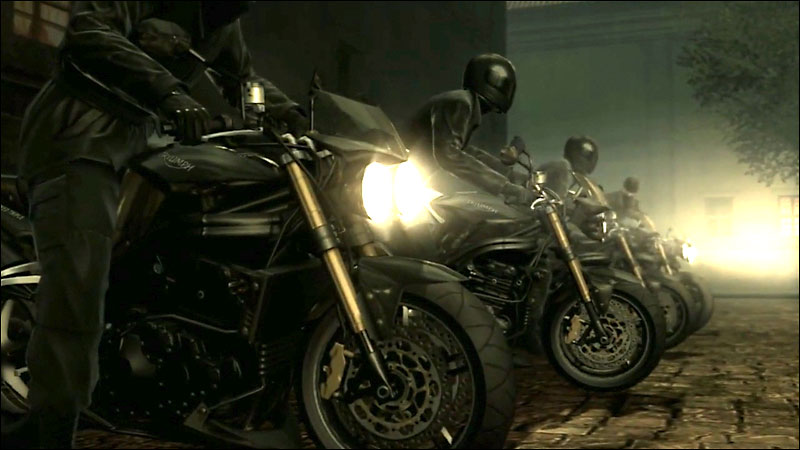 How much of a human being remains, when his individuality is lost?

“Zero’s goal was to achieve a unity of thought and awareness.”

‘Dehumanization’ is one of the most important themes of Metal Gear Solid 4. The game takes place in a depersonalizing world where the borders between a single centralized decision making System and society are starting to blur together. What is the role of the individual in a tight, well oiled machine? Is there even a free will left for human beings as single entities? This article seeks to find the instances where the theme of ‘dehumanization’ is brought forward in the game.

In Metal Gear Solid 4, the world is in the grip of the war economy. This economy is the global pillar of the financial world, and is being tightly controlled by ‘the System’. This control happens from a central entity, a decision making intelligence. People who are part of this system are stripped from their own will in favor of this intelligence. “That’s what they really represented… Uniformity without individual will, without change.”

SOP (Sons of the Patriots)

SOP is the means the System uses to control the humans fighting on the battlefields. The soldiers are being controlled from the inside out, meaning, their senses are being influenced, The AI acts as a collective brain for the entire unit. Meryl explains how she and her squad can literally share each other’s senses. “The nanomachine network inside each unit member’s body lets us share each other’s senses. They can see what I see. And it helps control pain. […] With SOP, my team can literally operate as one.”

Obviously this diminishes the individuality of each soldier. They aren’t allowed to have their own senses and emotions anymore.

As illustrated in the example above, the nanomachines basically substitute for the normal chemical processes that take place in the human brain. They overrule the brain itself and change the way emotions are felt by the soldier. Again, individuality is removed in favor of unity, of uniformity. Not to mention the absence of personal feelings and attitudes may very well be interpreted as a way to turn a person into nothing more than a pawn, a part of something larger.

“The nanomachines inside soldiers’ bodies adapt to different conditions… Promoting the release of neurotransmitters, hormones, and stimulants, giving them an edge in battle. They can create an artificial combat high by releasing endorphins at the same time a soldier kills an enemy… Or they can suppress hormones to neutralize the soldier’s emotions… Prevent them from panicking and engaging in friendly fire or needless massacres. It’s all controlled by the System’s core AI. It artificially controls the soldier’s pain, emotions, senses… In other words, the essence of his being.”

One thing that makes us human is our consciousness, our ability to think about the world and its reality. This includes emotions and feelings felt during stressful situations, like battles. In Metal Gear Solid 4, these emotions are being suppressed and controlled by the System. But they are still experienced by the individual, proven by what happens when they are disconnected from the System – the previously suppressed emotions suddenly overwhelm the individual.

“SOP has taken it even further and applied it to living human beings. The sins of war these soldiers carried inside them returned to assault them in the form of… unimaginable shell shock. The meaning and the system may have changed… But the battlefield hasn’t. Until that point, war was like a game to them. And then, suddenly, reality came crashing down.” “[…] the moment the System stopped… All the pain, and fury, and sorrow… All the trauma and stress, all the hatred, regret, guilt… All the sensations that had been suppressed were unleashed within their hearts.”

This passage demonstrates the clear division between the soldiers as part of a system and the soldiers as human beings. This contrast has become so great that they have become dependent on the system, and the reality it provided.

But even soldiers who aren’t part of SOP are part of the cycle created by the Patriots. EVA describes this when talking about the soldiers of the Paradise Lost Army:

“These kids end up fighting in proxy wars that have nothing to do with their own lives. They think it’s cool to fight like this. They think that combat is life. They don’t need a reason to fight. After all, for them it’s only a game.” These soldiers have also lost part of their individuality in the sense that they don’t even have a personal reason for their participation in the war, they are mere cogs in the system of the war economy.

A person is a man or a woman. An icon is an abstraction of a person. An icon doesn’t age or die, or live. Most importantly, it doesn’t change. In Metal Gear Solid 4, EVA explains how Zero has turned Big Boss into an icon, allowing him to neither live or die. The very principles of life are taken from him. He’s no longer a man, he’s an idea. In the shadow of the System and its complete control over the world… Big Boss isn’t allowed to live or die. He’s trapped for eternity in a brain dead prison. To bind himself to his friend –  to ensure his rule over the world… Zero transformed Big Boss into an icon, neither living nor dead.

Living at the mercy of machines

Ironically, the man behind the Patriots himself also ends up being deprived from his humanity. He himself becomes an empty shell, a body without a mind, only alive because a bunch of machines keep him that way. This man was the source of it all. And he doesn’t even realize it. He’s completely unaware of the fact that he led the world to the brink of ruin.

A world deprived of human ideals

Returning to the question posed at the beginning of this article: what makes us human? A consciousness? Or can an AI have a consciousness as well? Human qualities such as empathy, morality in addition to logical thinking may be one of the many possible answers to this question. Being nothing more than a system, the Patriots did not possess these characteristics. They could only operate from a single perspective. Powered by the industrial and digital revolutions that came before it… this age gave birth to a twisted economic revolution – a battlefield revolution. It created a new world without substance. In this new world, there were no ideologies, no principles, no ideals… […] There was only the war economy.

Metal Gear Solid 4’s story reflects on this contrast between humanity’s emotions, and the logical, depersonalized world that starts to surround them. It’s about what happens when people’s senses are taken away, when their individuality is removed, and how this affects their actions. Humanity may be flawed, driven by atavistic instincts and emotions, but it’s these same emotions that allow us to live, to feel for others, and to co-exist.