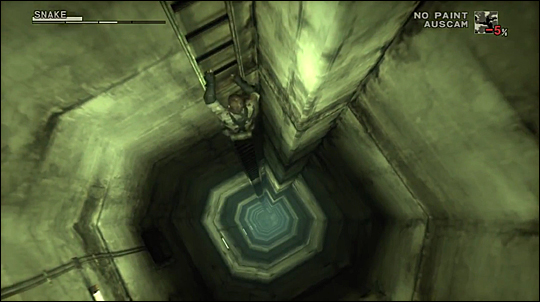 Ask any Metal Gear fan about ‘the ladder’, and chances are they know right away what you mean. For those who don’t know what this is about, here’s a small introduction. In Metal Gear Solid 3, after defeating The End in the forest, Snake must pass through a cave that connects to the mountains. At the end of the cave, a shaft with a ladder points straight to the summit. You begin your ascend. And you climb. The ladder doesn’t end. Above you and below you are only height and depth. It’s almost like you’re in an abstract world. Here, there’s no beginning or end, no before and after, only now. The rhythmic sound of Snake’s boots against the metal steps is entrancing.

And still you climb. Then, a faint echo can be heard. Music. It’s the ‘Snake Eater’ theme, that is, an a capella version, without instruments. The music takes you back to the start of the game. There’s a moment to contemplate on what has happened so far, and what’s yet to come. Concrete all around you. As the echo of the song fades away, Snake finally reaches the top of the ladder. You walk outside, into a completely different environment. Barren mountain slopes, vultures, howling winds. The ‘ladder sequence’ has puzzled people ever since the game came out. It seems to be pointless from a gameplay standpoint as well as from a narrative standpoint. And still, it’s proven itself as one of the most memorable moments in the series. What does it mean? Does it even mean anything? Is it meant as a reflective moment? Or as a joke? Everyone can decide that for themselves, but one thing is certain: it wouldn’t be Metal Gear Solid 3 without it.