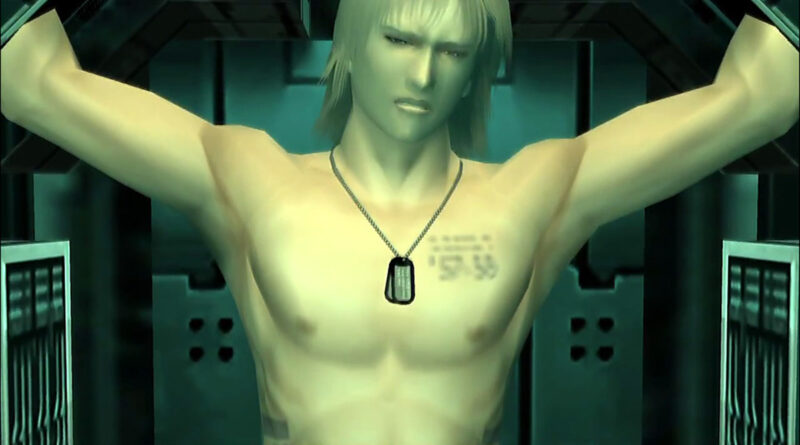 Sure, you may have played as Naked Snake in Metal Gear Solid 3, but contrary to what his codename suggests, he was never actually naked in the literal sense. Not completely, at least. Raiden on the other hand does make an appearance in the nude.

In Metal Gear Solid 2, after being captured by Olga and taken into Arsenal Gear, Raiden wakes up strapped to a device – in his birthday suit. After he has been freed from the machine, he has to infiltrate part of the facility undressed.

It’s a pretty funny part of the game that had people talking, or giggling, or even grumbling. But is there any meaning to it? Or, maybe a better question, how can it be interpreted?

First, it’s important to realize this part represents a turning point in the game’s story, a moment of catharsis. Up until this point, Raiden’s past has been unclear. But now it is revealed that years ago he was a child soldier who fought for the same man standing before him now – Solidus Snake.

Raiden comes face to face with his traumatic past, and he can no longer deny it. The memory is there again, whether he wants it or not. And now everyone knows, Raiden himself, the other characters, and the player.

But what does this have to do with being naked? Well, the nakedness has several symbolic meanings:

First of all, it represents the loss of his (fake) identity, the FOXHOUND soldier Raiden. His suit is gone, and the tattoos – reminders of his manufactured identity, and proof of his manipulated self – are shown all over his body. He was never allowed a real identity, whether it was during his time in Liberia, or as a pawn of the Patriots – he always was someone else’s creation, serving someone else’s interests. Someone else’s weapon, as his code name already implies. Raiden is just another persona. The disguise which he used to deny his true self, has been taken away. In a way, this is his real suit. The real Raiden – but, it’s still a suit. Though somewhere behind all these fragments of identity, behind the codename Snake or Raiden, behind the White Devil, Jack the Ripper, behind the rookie soldier with VR training, and behind the Skull Suit, hides the real identity of this man. A child soldier.

Secondly, Raiden’s nakedness emphasizes the fact that he has been reborn. He wakes up as his true self. The person he actually is, who he was before, is finally back.

It also represents vulnerability – both at a physical and at a mental level. Raiden is no longer protected, literally of course, since his body is stripped of the highly advanced ‘smart skin’ skull suit he was wearing, and so even the cold becomes his enemy. But also mentally, he can no longer hide behind the mask, he has to show everyone, including Rose, and more importantly, himself, who he really is. Metal Gear Solid 2 is a game that has (artificial) identity as a major theme in the story. His suit was an extension of his body, a physical protection, and his handle was a persona covering his real identity, a mental protection.

What’s also interesting is how this situation is reminiscent of a dream. Dreams play a big role in Metal Gear Solid 2, and this whole part feels like Raiden is in one himself. Nudity in dreams is quite common, it refers to the helplessness of the dreamer. When you are naked, your real identity becomes apparent, with all its flaws and imperfections. Dreaming about being naked in public means you don’t want give yourself away to others because of lack of trust. Raiden has refused to share his past with Rose, the person he lives with. He literally locks her out when he is in his room. This is also the point at which the game starts acting really weird due to the virus uploaded onto GW, making the dream like state even more apparent, since dreams are often strange and surreal.

To conclude, the ‘Naked Raiden’ part is truly meaningful and clever. It only adds to Metal Gear Solid 2’s brilliance as a postmodern story that – as random and weird as it may have seemed the first time – is the result of a carefully and meticulously constructed work of art.