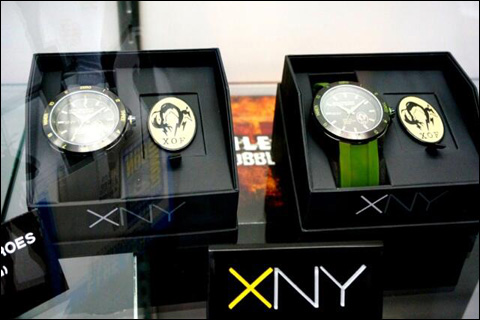 During the latest Kojima Productions Alert, the studio’s official podcast, Kaoru Saito (overseas licensing coordinator at Konami) appeared as a guest speaker, talking a bit about her job.

She explained there are two kinds of licensing, licensing in and licensing out. The first one means obtaining a license, to use it in the game. An example of such a thing is the Seiko watch in Metal Gear Solid V, and the walkman in Peace Walker. As seen in the first trailer, Metal Gear Solid V will also feature a walkman, the one that is given to Chico. This is not the same walkman as the one in Peace Walker. This one is called the WM-R55, and it’s the first machine that had the auto reverse function.

Licensing out means granting the rights to other companies to use a license for the creation of products, such as Metal Gear themed merchandise or clothing.

Listeners could also send in questions, and one of them was: When will the wrist watch be available (the Seiko watch Snake is wearing in the trailer)?

Since that watch was only available in the Japanese market, and is not being made anymore, auction sites are the way to go. However, Konami will release a special Ground Zeroes watch. It will not be the Digiborg watch, which is the one Big Boss is wearing. It’s an analogue watch designed by Shinkawa. They are still deciding on the colors, and they might release two varieties, but this isn’t certain yet. What they could say is that it comes with the XOF pin. The watches on display at Comic Con