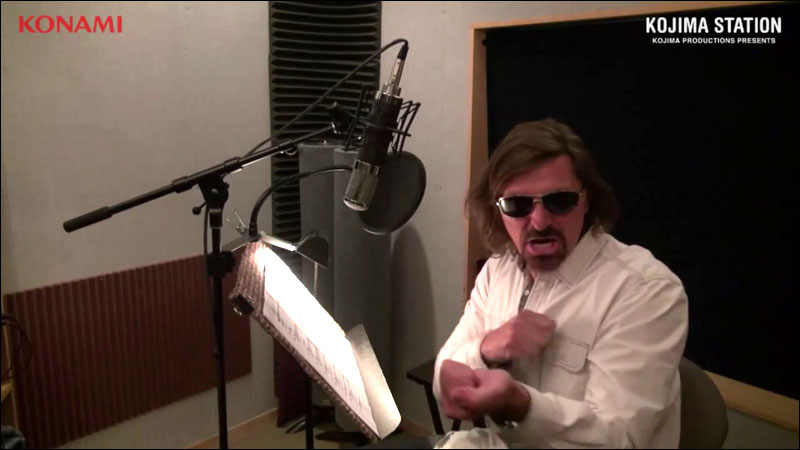 Kojima Productions Episode 5 is out now, and one of the highlights is an interview with Kaz’s voice and facial capture actor Robin Atkin Downes.

They played a video of Christopher Johns sitting down with Kazuhira Miller actor Robin Atkin Downes in LA. Chris asked questions sent in by fans while Robin was playing Ground Zeroes.

One fan asked whether there was a big difference between voice acting for a portable game and a home console game. But according to Robin, you are playing the same character, so there is not really a difference in that sense. But the facial capture technique used in MGSV brings a new dimension to the acting. “It’s like shooting a movie or a television show, where just subtle movements on the face read.” He added that he is very glad to see the industry going in this direction.

“Kaz is going to be hell bent on revenge, and it takes his character to a whole different level, and his relationship with Snake.” Robin Atkin Downes said. “It just feels really good as an actor to be bringing those emotions up.” According to Robin Atkin Downes, Kaz’ anger in The Phantom Pain is more of a means to cover up his vulnerability. “There’s a lot of emotions going on.” he explained. “And it just seems to be covered up with that right now, because he can’t get in touch with them.” He did not want to give away too much.

Speaking of this, Robin remembered recording Kaz’ backstory for Peace Walker a few years ago. “I’m sort of telling this backstory and I found myself getting upset in the middle of it.” Robin Atkin Downes recalled. “It’s a very powerful moment for me, and very rare to have those types of situations happen recording a video game, and I think that’s a testament to the strength of Kojima’s characters.”

Of course the one question that kept coming up was how it felt to be ‘played like a damn fiddle’. Robin ensured it felt great. “You’re about to see some major music coming out of Kaz in the next game.” he teased. “Fiddling is just the beginning of it.” Also in this episode was the announcement that the Deja Vu and Jamais Vu are going multiplatform May 1st, free of charge. For more information, go here.

Then they played the video of Stefanie Joosten infiltrating Kojima Productions to find out more about the 3D scanning process used in Metal Gear Solid V. For more information, go here. Stefanie will be doing more of these reports in the future, so if you have any requests send them to Kojima Station.

After that they showed how to collect some of the XOF patches needed to unlock the Deja Vu and Jamais Vu missions, followed by some updated Ground Zeroes records, and Jackie did a speedrun through one of the game’s missions without using weapons.

After showing Robin Atkin Downes interview, the show wrapped up.