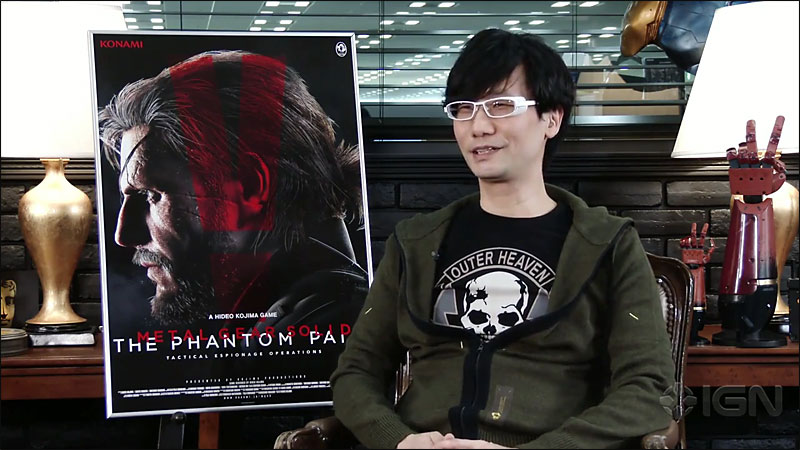 In a video published by IGN, Hideo Kojima talks about Metal Gear Solid V: The Phantom Pain – how the game is shaping up, how he designed the story and characters, and how it will be his last Metal Gear game. Kojima started off by thanking everyone for their patience. After long periods of testing and experimentation, the studio is now in the stage of polishing the game and putting in the finishing touches. According to Kojima, the goal is in sight.

The vast environments of the game are filled with content – not just enemies, but also items and ‘various interactive elements’, which are now being balanced. Kojima is satisfied with how things are shaping up.

As explained before, the game will feature a ‘freely assembled episodic format’, comparable to a tv series. The story won’t be told in a linear way but will be gradually pieced together as the player progresses.

“I never set out to create a franchise called Metal Gear”, Kojima said. The game would originally have a different title, but they decided to name it after the main enemy weapon. And now that the series is known as Metal Gear, there is no going back. It has to have a Metal Gear. According to Kojima, the bipedal walking tanks in MGSV are inspired by sci-fi movies of the era. “Certain aspects are realistic, but when it comes to high-tech weapons and walking tanks, what you’re seeing are visions of the future to the lens of that era.” But Kojima also looked at failed military R&D projects. He hopes people will appreciate the details and enjoy the atmosphere of sci-fi from 1984. Kojima explained how he works together with Yoji Shinkawa for character design. Hideo comes up with name, age, habits, background and language. Shinkawa then gets to work. Kojima checks the designs and gives feedback. Their two booths are next to each other so they can communicate constantly. After the basic design is decided upon, Kojima leaves Shinkawa to it. Usually, the two are constantly working together, but sometimes Shinkawa surprises him with something that is very different from what he originally asked for. “That’s the really fun part of working with him.” Kojima said. “Several characters in The Phantom Pain are the result of this.”

Building the FOX Engine was vital for this project to succeed. Kojima explained how with Metal Gear Solid 4, he tried to do sort of an open world approach, but couldn’t realize it at the time. “I felt we were also lacking behind western studios in other areas like physics simulation, lightning and rendering techniques as well.” This is what lead to to creation of the FOX Engine. Now, small teams of specialists can individually work on the things they are best at. MGSV differs greatly from MGS4, both in terms of development methods as in terms of content.

Kojima noted how these days with online connectivity, there’s always other people in the world playing the same thing. At a certain point in the game, you’ll be able to attack other players’ Mother Bases, or join as allies. As we know by now, Snake won’t speak much in The Phantom Pain. According to Kojima, the character has always been an extension of the player, an alter ego. “I made a very conscious effort this time to bring Snake closer to the player’s perspective.” Kojima explained. “As much as possible, Snake will act based on the player rather than doing things like making spontaneous comments or flirting with women.” He once again made a comparison to Mad Max, where the characters around him are expanding the story.

So, will MGSV be Kojima’s last Metal Gear game? Kojima said that the saga he built with Metal Gear, Metal Gear 2, MGS1, 2, 3, 4 and Peace Walker, he will finally be closing the loop with The Phantom Pain. “Even if the Metal Gear franchise continues, to me this is the last Metal Gear.” he concluded.

Lastly, Kojima was given an opportunity to leave his fans a message. “We’re putting everything we have into redefining the concept of strategic freedom in open world gaming, as we sprint towards release during this critical phase.” Kojima said. “It’s been challenging, but also immensely rewarding, and I can’t wait for fans to experience what I think will be the most interesting game in the franchise. Please, look forward to it.”