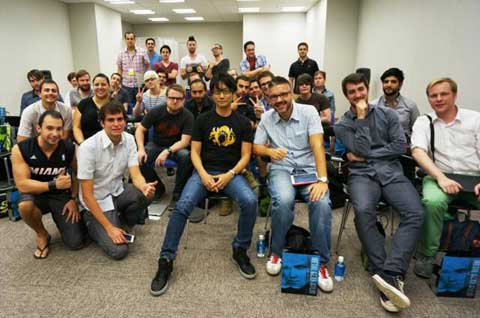 Today, Kojima held a Metal Gear Solid V gameplay demonstration for the European press. It was the same demo that was shown during the LA studio opening earlier this month. Again, Yuji Korekado would be the one playing. Kojima also provided some small bits of information regarding the Tokyo Game Show, which will begin September 19th.

At TGS, will release MGSV E3 trailer w/JPN VO. Green Band ver for convention center, & Red Band ver for the web both will be released sim.

You will find out the Japanese voice actor playing for Ocelot tomorrow when you see the new trailer.

As I was passing by the cubicles for TGS & MGSV related checks, saw my team m8s playing GTAV which I couldn’t resist playing. Played for 1H.

For a schedule of MGSV at Tokyo Game Show, go here.

Views: 554
Liked it? Take a second to support MGI on Patreon!