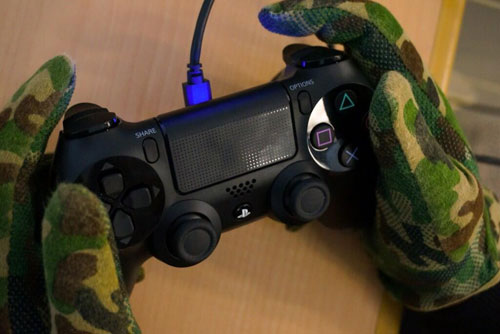 A while ago Kojima expressed his appreciation for Sony’s new controller, the DualShock 4. Today, he has been using the controller doing checks for Metal Gear Solid V: Ground Zeroes, shedding some light on a new feature. “Back to game check on PS4 today. Voice of Donna-san comes out from the speaker in DUALSHOCK4 controller.”

Donna Burke, who is performing several songs for Metal Gear Solid V, will also be the voice of the iDroid Big Boss uses in the game. Kojima’s comment seems to confirm it will make use of the DualShock’s built-in speaker. So even though the game is multi platform, Kojima is still making use of this exclusive PS4 functionality.

Why Kojima is wearing camouflaged gloves on that photo… that will probably remain one of the mysteries of life.