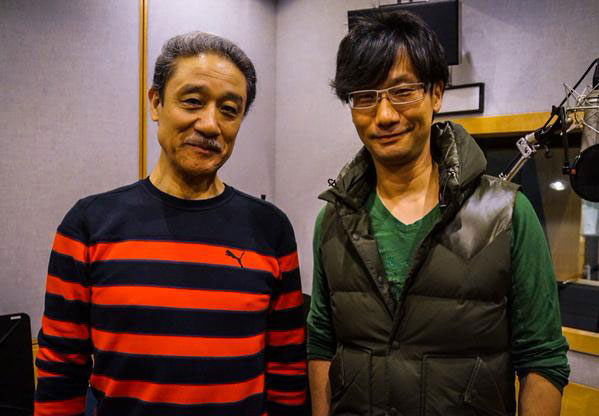 Earlier today, Kojima posted some pictures on his Twitter showing a voice recording session. This time he has been recording with Japanese voice actor Banjō Ginga. For those who don’t know, Ginga previously voiced two roles for several Metal Gear games, he played Liquid Snake in MGS1 and MGS2, and Liquid-Ocelot in MGS4, as well as Zero in MGS3 and Portable Ops. “Had a great shooting with Banjo Ginga, the key person in MGS SAGA.”

Both Liquid and Zero are likely to make an appearance in The Phantom Pain. It is widely assumed that Eli, the boy seen in the E3 2013 and E3 2014 trailers, is a young Liquid Snake, and Zero will play an important role in the story as Snake’s nemesis. However, given the actor’s age it does not seem too likely he’ll be playing Eli, but he could very well provide the voice for Zero, aka Cypher. Or, it could be for something else entirely (Metal Gear Online?). With Kojima, it’s always a mystery.