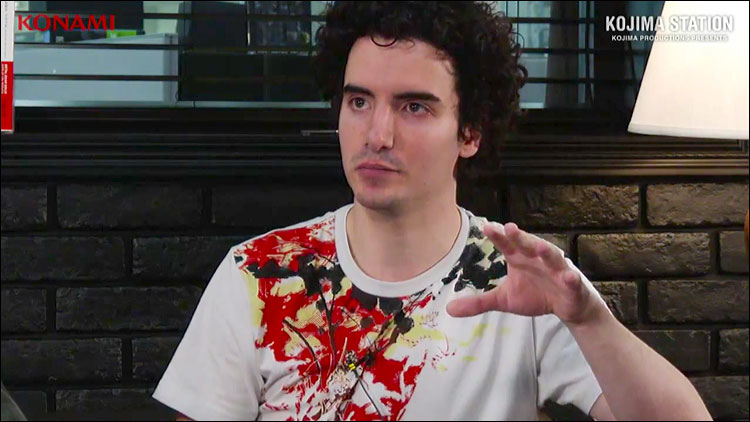 Some people noted that in Ground Zeroes, Miller talks a bit too much, especially when replaying missions and you have to listen to the same information every time. This issue will be addressed in The Phantom Pain, which probably means you will be able to shut him up using your iDroid.

In response to the absence of a knocking mechanic, they once again stated that ‘there will be something’ in The Phantom Pain that will have the same function as knocking (luring guards to your position), but they won’t reveal yet what it is. While this was being discussed, Ken Mendoza was making grunting noises, so maybe Snake will be able to do that, or he might even have a dog companion (as seen in the early artwork).

They also reaffirmed that cardboard boxes and boss fights will make a return in The Phantom Pain, as well as more variety in things like enemies and environments.

Furthermore, Sean Eyestone and Jordan Amaro addressed some of the concerns people had with the new storytelling mechanics in MGSV. Most of these arose from Eurogamer’s interview with Jordan Amaro a few days back, which lead to some misunderstandings. It was a casual interview, and some took certain jokes that were made a little too seriously.

One of the concerns was about reducing the cutscenes. “What we have to say about the cutscenes, is that the proportion between gameplay and cutscene is more balanced this time.” Jordan Amaro said. Because the structure is different (as this is an open world game) the cutscenes won’t be as long as before, and they will be spread out more  throughout the game. “So, instead of playing through one huge segment of gameplay and then having one huge cutscene, the cutscenes are scattered here and there and you get the story as you play.” Eyestone added. However, fans won’t have to fear that this will negatively affect the story. “The spectacle and the craftsmanship is still there.” Amaro ensured. “We have to reassure you, for those of you who were worried, that the cutscenes are still kick-ass. They will still be, like, really really really cool.” Related to this subject, some people also voiced their concerns about Snake not talking as much as before. “Open world game means that the scope of the play space is greater than it has ever been, right?” Amaro explained. “Inside this bigger play space we have systems that work together, and those systems can be disturbed by the player.” This means that the amount of possible things that can happen also increases. “In TPP the means of player agency are greater.” Amaro said. This makes it difficult to impose a strong, opinionated character on millions of different players, with different play styles and perceptions.

“That said, Snake still is Snake.” Eyestone added to that. “He does have his personality, he’s still there. It’s just, we’re trying to make it easier for people to relate to him and feel what it’s like to experience life as Snake.”

Another reason (which has been stated before), is that the new facial technology gives the studio the possibility to show Snake’s emotions through facial expressions, where in previous games he had to express them through words. This was also the reason they decided to cast Kiefer Sutherland for this game.

They also wanted to make clear that the reasoning about Big Boss talking less because Kiefer Sutherland would be too expensive (as was stated in the Eurogamer interview) was simply a joke, pointing out that this decision was made in the concept stage of the game, long before they hired Kiefer.

Aside from Jordan Amaro’s appearance, the hosts discussed some general gameplay tips for Ground Zeroes, challenged the world record for a tranquilizer headshot (ending up at fifth place) and Shinkawa made a brief appearance to select the two winners of the art competition. He also answered some questions sent in by fans.

Next episode will come in two weeks, on April 25, and will feature an interview with Kaz Miller’s voice actor Robin Atkin Downes. People can still send in their questions for him through the Kojima Station website.

Views: 948
Liked it? Take a second to support MGI on Patreon!