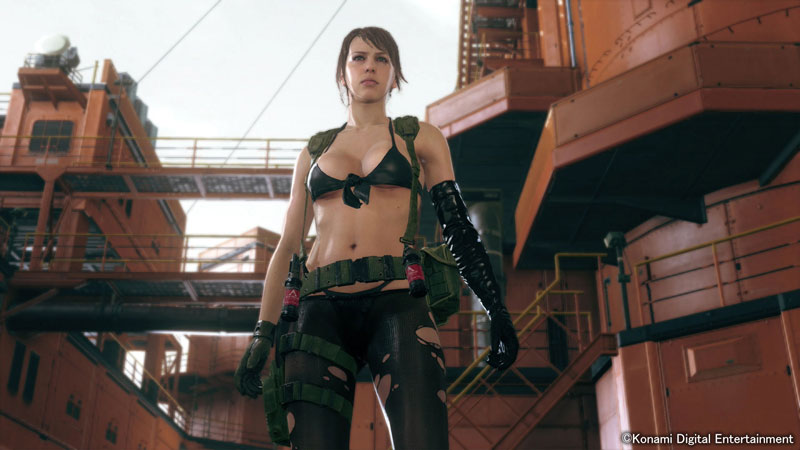 In an article published in Dutch newspaper Het Parool, Stefanie Joosten – herself Dutch – (playing the role of Quiet in Metal Gear Solid V: The Phantom Pain) talks about how she got the role, what she thinks of the controversy surrounding it and the recording process (translated from Dutch by Metal Gear Informer).

Stefanie Joosten (26) has always been intrigued by Japan and otaku culture, and has been gaming from a young age. This made her decide to study Japanese at the University of Leiden. During an exchange program she visited Japan and she got her master’s degree in Tokyo. That’s when she got in touch with a casting agency specialized in western models. Since there is a lot of demand for this, she was able to make a living fairly quickly and she decided to stay in Japan.

Joosten explained how she got the role for Quiet. She received a phone call asking her if she wanted to audition for a video game. Initially, the fact that it was new Metal Gear Solid was still kept a secret, but when she saw Hideo Kojima she began to suspect something. She described the audition: “There was a crate with gun replicas. ‘Take one, and pretend like you’re infiltrating an army base’, they said. Kind of awkward, because I had no idea how to hold this thing. Fortunately, I could draw inspiration from the games I play, the other girls didn’t have a clue at all.”

She got the role, and a two year process began in which her face was captured in 3D. Her facial expressions were captured using 37 cameras, and her movements were recorded in a green screen studio using motion capture. “Before this I received professional combat training. Quiet is a sniper, so I had to be able to handle a gun. The other participating actors were all men who used to be in the army, but for me it was completely new.”

As we know, Quiet cannot speak. “She does use certain sounds to communicate, she groans and hums. So I voice recorded those things.”

When Quiet was first revealed, there was some controversy on the internet because of the way she looks. Joosten said she was surprised at first by the sketches as well, but she stated once again that there is a narrative reason her character is wearing little clothing. “I cannot reveal it yet.” she added. She also explained that she is sometimes annoyed by how female game characters look in games, for example in the Dead or Alive series. But she feels it is different for Quiet, because this is a character with substance. Furthermore, she believes that Quiet is a tough character, not a helpless woman who has to be saved by men.

Joosten has attracted a lot of new fans because of the game. She receives a lot of messages, but they have always been positive. Is she going to play the game herself? “Absolutely, although I can’t play as myself. Quiet isn’t a playable character. But a Quiet action figure will be released, so I’ll be able to hold a miniature version of myself.”