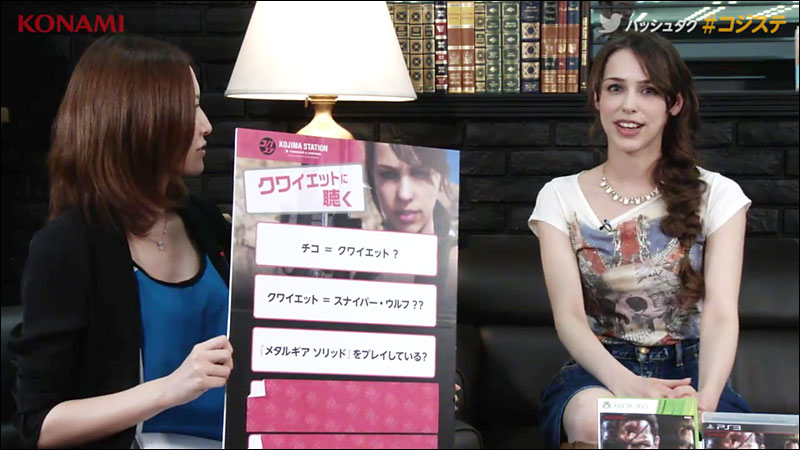 Stefanie Joosten, the actress playing the role of Quiet in Metal Gear Solid V: The Phantom Pain, was one of the hosts during the latest Japanese Kojima Station episode. At the start of the show she briefly responded to some questions. Thanks go to Crimsondramon on Twitter for the translations.

First, they addressed the notorious ‘Chico = Quiet’ theory. They said this theory mainly comes from the overseas (western) community. According to Stefanie though, Quiet is definitely a female, while Chico is a male. Conclusion: the theory is not true. The next question was about whether Quiet might be a young Sniper Wolf. The staff answered that both characters are from different eras, so it’s unlikely the two are related or even the same person.

The third question: Does Stefanie play MGS? She responded that she has cleared Ground Zeroes. She also likes anime and games in general.

The fourth question was about the motion capture she has done for Quiet. Stefanie has done full facial capture and the body motions for this character, providing a wide range of different emotions.

Question number five was about the difference between Stefanie and her character Quiet. The most obvious difference is the fact that Quiet is a character who cannot speak.

A bit later into the show, when asked about her favorite Metal Gear characters from MGS1, she answered she likes the Cyborg Ninja and Sniper Wolf.

To see the whole episode, you can watch the video below.