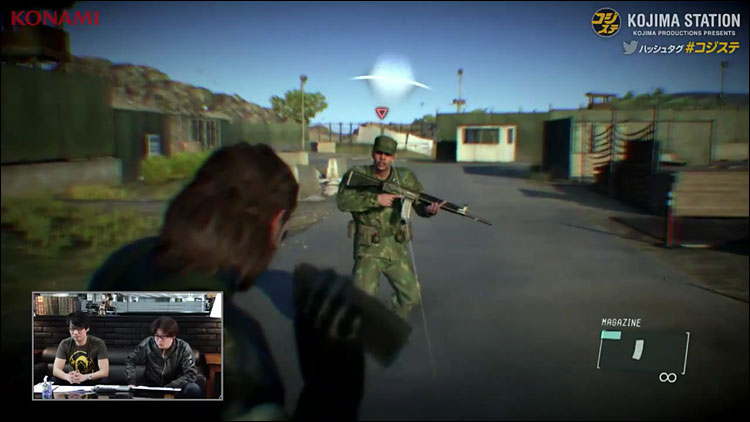 They started off by looking back at the release week of Metal Gear Solid V: Ground Zeroes. Hideo Kojima, Ken Imaizumi and Ayako were in Paris. Right after arriving by train they had to shoot the Micromania video, which took practically the entire evening. Kojima’s director’s instincts kicked in, because he wanted to come up with things to do for the video, but the video’s director didn’t want it. For some brief behind the scenes recordings by Imaizumi, go here. During his stay in Paris, Kojima held a signing session in the Micromania store, and attended a movie screening where they played one of Kojima’s favorites, 2001: A Space Odyssey.

After that, the episode went on to show some gameplay techniques for Ground Zeroes, divided into three steps: from basic to advanced. They explained how to do hold ups, and how you can use a magazine to take out a guard or a camera in reflex mode, among other techniques. The absence of the knocking-on-wall mechanic came up briefly, and Sean Eyestone said there will be another way to distract guards in The Phantom Pain, aside from throwing magazines.

Then they showed a video in which creative producer Yoshikazu Matsuhana dropped by Shinkawa’s workspace. Music composer Ludvig Forssell spoke a bit about his work, using several instruments and a banana to demonstrate the layers of sound he uses to create the music. During the show, Kojima Productions also announced an art contest. The winner will receive a very limited Ground Zeroes X PUMA jacket, of which there are only 70 in the world. These jackets are not for sale and were made for the Ground Zeroes boot camp in Nasu, Japan. In order to win you have to go to this website and make your best drawing of Big Boss.

In next week’s episode, they will talk about the 3D scanning used in Metal Gear Solid V to capture objects and people. People can also send in their wishes about what they’d like to see in the this episode.

What would you like to see in the next episode of #Koji_Sta? Let me know!