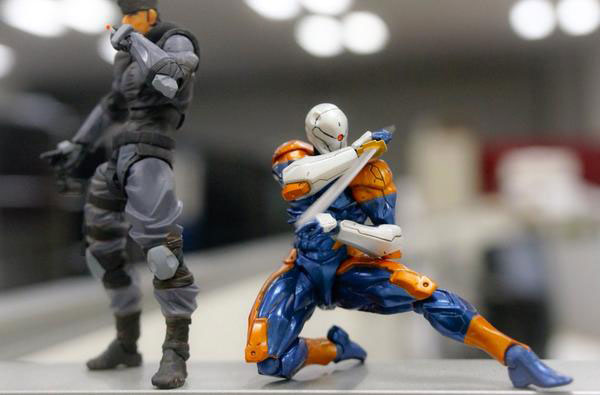 Up for some Metal Gear goodies? Well, here’s a round up of all MGS merchandise related pictures shared by Kojima (among others) in the past days. First, the Metal Gear Solid Deluxe Edition, a re-release of the comics by Ashley Wood. Secondly, some detailed shots of the head belonging to the Play Arts Ground Zeroes Snake that was on display at TGS. A Diamond Dogs branded cushion, it’s not clear whether this will be sold in stores. Some new pictures of the Solid Snake and Gray Fox RevolMini figures, including the packaging. “RevolMini’s Cyborg Ninja sample has arrived. 10/25 available in stores. ‘Make me feel it!'” “RevolMini’s Cyborg Ninja that Yoji has kindly inked slightly. It can successfully appear with round-shoulder.”

Prototype of the sneaking boots by Puma, unveiled at TGS. “‘Sneaking Boots’ collaborate with PUMA still in prototype phase to check how it fits. The gaiter is removable.”