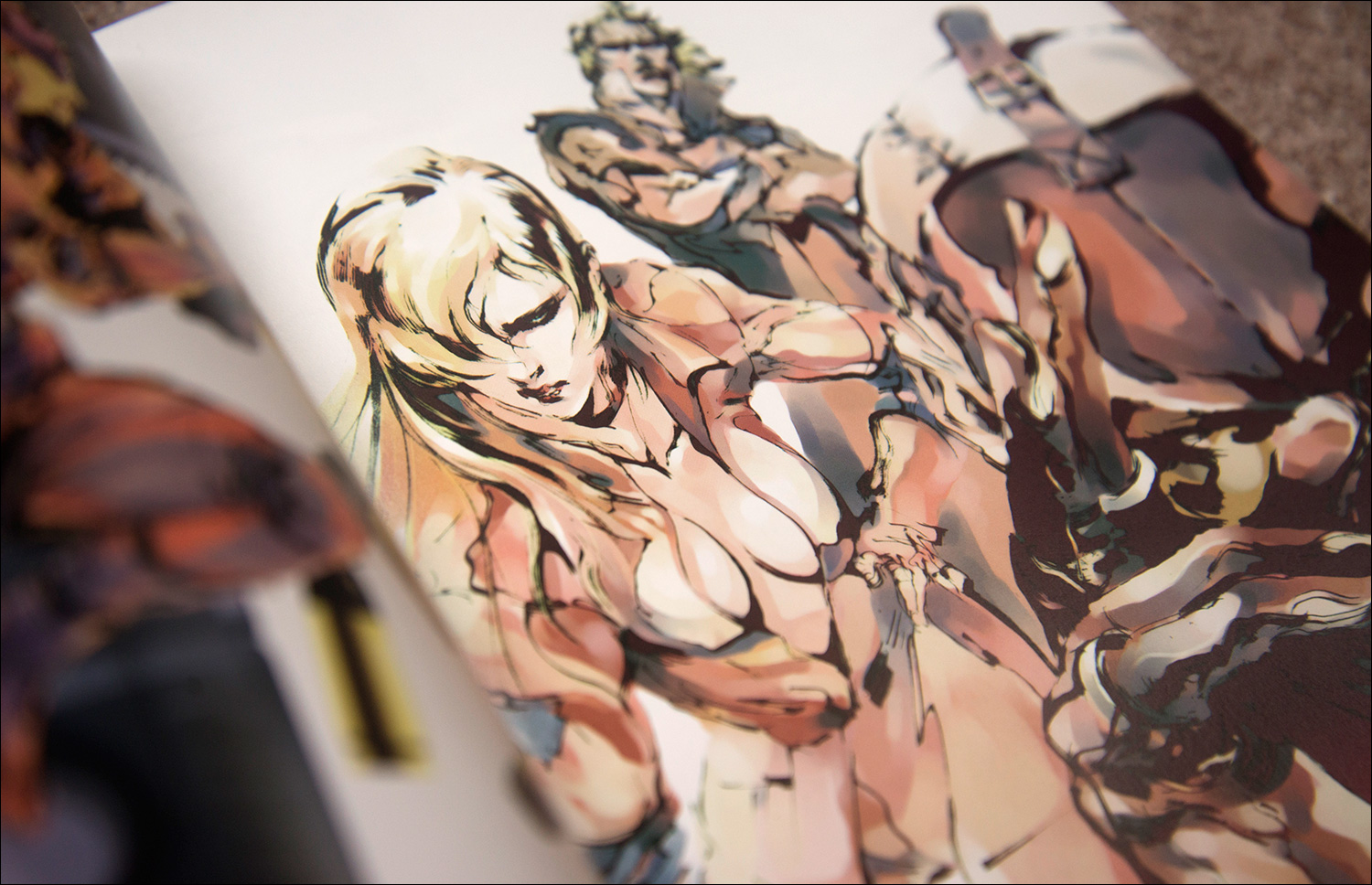 As the first in a series of dedicated Metal Gear Solid artbooks, The Art of Metal Gear Solid (by Yoji Shinkawa) was released in 1999 by Soft Bank Publishing. It focuses, as the title suggests, on artwork drawn by Shinkawa for Metal Gear Solid 1 on the original PlayStation, although it features some work from other artists as well.

This book originally came in a blue foil with a numbered sticker plate. However, as this is a secondhand item this is no longer the case. The sticker is still there though, and has been attached to the frontcover of the book.

The frontcover features a charcoal drawing of Solid Snake by Shinkawa, and is protected by a dust cover. The dust cover is made from transparent plastic and contains the title, logos and some other information. On the red band directly below the title is a quote from the opening of the game, in which Campbell briefs Snake on his mission.

The book itself is designed very well, with full page prints containing colorful artwork and black and white sketches, its chapters separated by semi-transparent title pages. Some of the illustrations are accompanied by small comments by Shinkawa in both Japanese and (imperfect) English that give some insight into the design process and the context they were used in. Glossy silver printing is applied throughout the book in both the artworks, the borders and lettering.

The 179-page book is divided into two parts. Part 1 contains official illustrations, publicity illustrations, illustrations for magazines and illustrations for goods. Part 2 focuses on work that was used during production: characters, mechanics, early mechanics, artwork, drawings ‘from the sketchbook’, costumes and large square cards, the opening demo movie storyboard, visual effects directions and a talk with Yoji Shinkawa and Yoshitaka Amano (in both Japanese and English). At the very beginning of the book is a fold-out artwork of Meryl Silverburgh.

What’s always one of the most interesting things about these books is being able to see concept art: sketches used during production showing early character designs and unused items. Reading about the context it was made for and how Shinkawa created it is fun as well.

All in all this is a very appealing item for any Metal Gear fan. Yoji Shinkawa is considered one of the best artists in the industry and his recognizable style and mastery of light and shadow makes his artworks a joy to look at. The concept sketches, comments and interview give some insight in Shinkawa’s creative process and the decisions made during the game’s development. The only problem is that these books are now quite rare and expensive, so getting your hands on one is a costly endeavor, unless you get lucky.