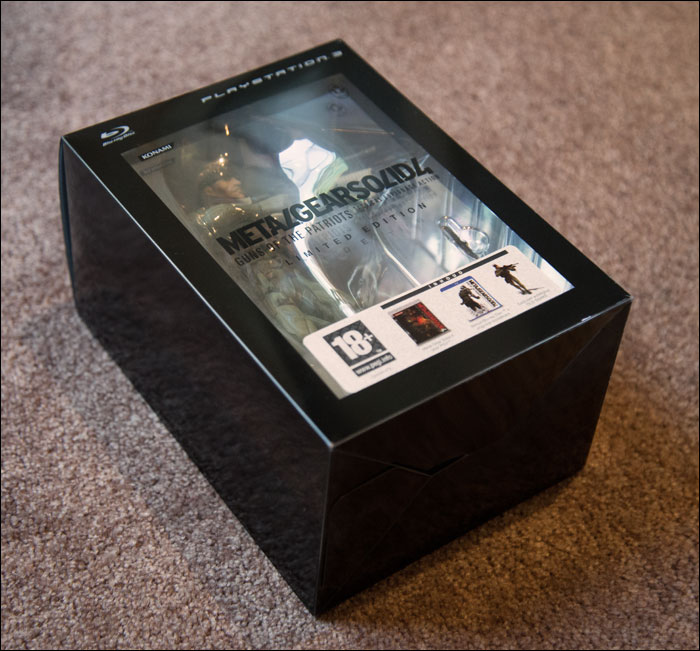 Metal Gear Solid 4 Limited Edition launched alongside the game in PAL territories, in June 12 2008. It’s a pretty rare item – apparently only 25000 were ever made, and they were distributed among Europe and Australia. It comes in a black plastic box with a window on the front. Not a very common format for collector’s editions. You get three items with this limited edition: the game, an Old Snake action figure and a Blu Ray containing a making of and a soundtrack. It comes with the regular case of the game, the PAL boxart, which many feel is the best looking version of the three regions. The action figure is quite small, but it is pretty well made. It actually looks l a lot like the character it’s supposed to represent, something that can’t be said for all figures. Snake is holding an assault rifle, and also comes with a stun knife. The Blu Ray contains a reasonably lengthy making of documentary. The soundtrack is a nice extra, but it’s a shame it’s only a small selection of all the music in the game. Metal Gear Solid 4 has a fantastic soundtrack, and some great tracks are sorely missing on this disc. All in all it’s not a fantastic package, but for the collector or Metal Gear fan it’s still an attractive item to own, also because of its scarcity. The statue and soundtrack (though incomplete) are nice extras as well. It is just too bad the box looks fairly simplistic, and isn’t decorated with some of the incredible artwork Shinkawa is famous for. Still, a decent collector’s edition for an amazing game.