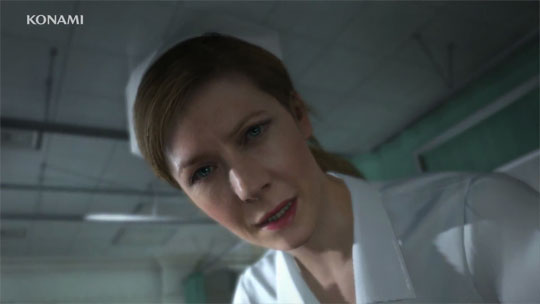 Every Metal Gear fan will already have seen it, the latest trailer for Hideo Kojima’s current project, Metal Gear Solid V: The Phantom Pain. But like a true Metal Gear trailer, it manages to show a lot, while raising even more questions. Here is an analysis.

First of all, the trailer shows several points on the timeline. Coupled with earlier information, this is what we can reconstruct as a possible chronology:

– Ground Zeroes (shortly after Peace Walker, so around 1974): the start of the game. Snake infiltrates the Cuban Prison Camp Omega in an attempt to rescue Chico. The burned man is introduced, and his plans to attack the Mother Base of Militaires San Frontieres.

– The attack on Mother Base (shortly after the Ground Zeroes part, so around 1974): Mother Base is attacked by an armed group. Snake and Miller manage to escape by helicopter, but at some point get heavily injured (maybe a crash?). Mother Base is destroyed. – Hospital scene (shortly after the Mother Base attack, so around 1974): Snake, Miller and a third person (we see the scene from his point of view) are in the emergency room of a hospital. Big Boss is rescued, but falls into a coma. – Hospital scene 2 (9 years later, so around 1983/1984): Big Boss wakes up from a coma. His left arm has been replaced by an iron hook. The hospital is being attacked by an armed group, possibly with the goal to kill Big Boss. A mysterious bandaged man who calls himself Ishmael (a possible reference to a character from Moby Dick by Herman Merville), helps Big Boss escape. – Big Boss running out of the hospital, it’s difficult to tell where this fits chronologically, but probably just before the ambulance scene mentioned next.

– Ambulance scene (shortly after the hospital attack): The bandaged man and Big Boss try to escape the hospital in an ambulance, but this results in a crash. Big Boss drags himself out of the vehicle, and finds himself eye to eye with a floating character wearing a gasmask, resembling Psycho Mantis.

– Ocelot horse back scene (probably shortly after the ambulance crash): Ocelot (presumably) arrives on horse, and him and Big Boss join forces, and take flight together. They are being attacked by a man on a flaming unicorn. At some point some force seems to strike in front of them, causing the horse to throw Big Boss of its back.

– Diamond Dogs scene (probably some while after the hospital escape, so somewhere in the early 80s): Snake is sitting on a motorcycle wearing a Diamond Dogs jacket. He has a mechanical arm now that looks a lot like the one Zadornov has in Peace Walker. Miller seems to talk about ‘their new home’, probably a new base. The most curious element in this shot is the thing sticking out of Snake’s forehead, resembling a horn. According to Kojima, this is actually debris embedded into his skull.

Now, here are some images from the trailer, and what they are showing: This is the attack on Mother Base, in which the plant is completely destroyed. A gasmask wearing character who reminds us of Psycho Mantis in MGS1. It is very likely that this is Ocelot (probably in his late 30s). He is starting to grow his mustache and comb his hair back like he does in MGS1 onwards. His clothing style is also showing the cowboy look he is famous for (especially the spurs he is wearing). This takes place after the hospital escape scene. Ocelot helps Big Boss escape on horseback. Ocelot rides, while Snake fires at enemies. This looks like a gameplay segment, similar to the escape scene in (for example) MGS3, where EVA drove the bike and Snake fired at enemies. The horse resembles the one The Boss rode in MGS3, but since this particular horse died in Peace Walker it must be a different one. The title of the game is Metal Gear Solid V: The Phantom Pain. The subtitle could refer to many things. Most literally, the arm Big Boss is missing. It could also refer to the fact that Big Boss had to kill The Boss, who he feels was a part of him (‘Half of me belongs to The Boss’, as Snake said in MGS3).

Another noteworthy thing is the fact that instead of ‘5’, this game uses the Roman number ‘V’. This seems to be related to the ‘V’ mentioned at the very end. Kojima explained in an interview the reason to use ‘V’ instead of ‘5’ is that they wanted to reinvent the series and have it reflected in this way, and the ‘V’ stands for the victory the team hopes to achieve with this game. ‘V has come to.’ The line appears on the screen, and we hear a woman’s voice saying it. It seems to be significant, but very difficult to tell what it means at this point. ‘A Phantom Battle Waged by the Vanished’. ‘V’ stand for ‘Vanished’? Big Boss is wearing a jacket with the Diamond Dogs logo, and we hear a voice over of Kaz saying ‘Our new home’. Diamond Dogs is a new unit built by Big Boss and Kaz to replace MSF. Maybe Kaz has been setting it up in the nine years Big Boss was in a coma, and he is now showing it to him (‘You see this?’). Kojima explained that the name has several meanings, one of them referring to the unit being comprised of so called ‘Dogs of War’, who despite this still have their pride (hence the ‘Diamond’). This takes place after the attack on the hospital, since the arm is already missing. Big Boss now has a prothetic arm similar to the one he got from Zadornov (it could be the same one). Kojima said that this arm will grant Big Boss some special abilities. The song used in the trailer is about being an outsider. From Wikipedia:

Manson explained that the title Not Your Kind of People was ‘a call to arms in a way to anyone who feels like we do about the world’, saying that ‘it can be great to be outsider.’

There’s a lot more little details you can get from the footage released so far, but it’s hard to go through every possibility while staying as close to the truth as possible. Of course, it’s important to remember Metal Gear’s trailers are never what they seem, nothing can really be taken at face value. So keep in mind that everything above could turn out to be completely false. It’s merely an interpretation of what has been shown and said so far. We won’t know anything for sure until we’ve played the game. Especially when to song accompanying the trailer states ‘Everything is a lie’.