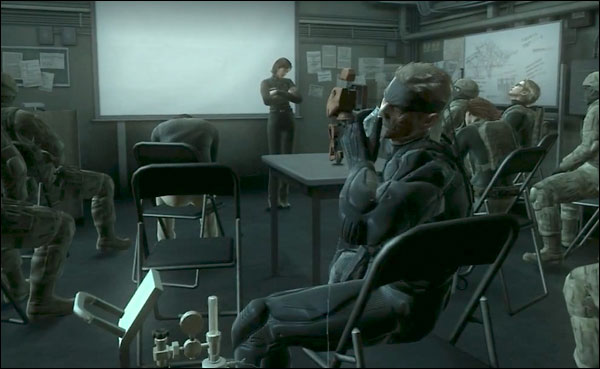 June 12 2008. A day many Metal Gear fans had been waiting for impatiently: the worldwide release of Metal Gear Solid 4: Guns of the Patriots. Today marks the fifth anniversary. Playing through the game, going along with Snake’s final mission, was a special moment for a lot of fans. Many things contributed to this game’s charm, and it would take too long to name them all. But here are five factors that played a big role in engraving the experience in the minds of its players.

Starting the game for the first time, after years of anticipation

Starting with a bang, the game began with a couple of live action videos made by Logan, showing television programming from the game’s world. You could switch between channels: there were talk shows featuring voice actors from the game (including David Hayter), surrealistic cooking shows, and advertisements for each of the PMCs. These videos were said to have the budget of an entire PSP game, and it shows. They were very a spectacular, impressive mix between live action and CG, and they immediately set the tone for the game, making you realize your were about to experience something truly special. After completing act 3, players suddenly found themselves back in the first Metal Gear Solid title, with Snake approaching the facility on Shadow Moses. Replaying this game brings back a lot of memories for many players: 9 years have passed for Solid Snake, 9 years have passed for the players. When the player has entered the facility, Old Snake wakes up, and the polygonal Solid Snake model transforms into the Old Snake from MGS4. “Everything all right, Snake?” Otacon asks. “I was having that dream again.” Snake explains, as the helicopter enters the snow covered lands of a desolate Shadow Moses. It’s time to return to the place where it all started, for the last time. Throughout the game you are constantly reminded you are playing as an old, dying man, who drags himself through this final mission, with complete disregard for his own life. This is presented in many ways: Snake gets back problems when he walks around in crouch position for too long, he constantly makes cynical jokes about his approaching end, and suffers from many physical afflictions. When he jumps from a helicopter he hurts his back and falls to the ground. It is a far cry from the young and stoic hero we started this saga with, and it gives the game a sense of finality, a melancholic feeling paired with the knowledge that this is the final chapter in the story, and after this Solid Snake’s mission will be over for good. This bittersweet feeling of sadness and finality is something that is woven into the entire game, or, as Snake said it, with both relief and grief in his voice: “This… is my final mission.”

Crawling through the microwave hallway Who could forget the microwave sequence? Near the end of the game, Snake has to drag his exhausted body through a long corridor protected by radiation. The player was supposed to tap the triangle button for several minutes on end, while a split screen showed all the characters, as well as Snake, fighting for their lives, and the tragic theme song playing in the background. This was the final obstacle before reaching the AI that controlled the Patriots. Snake has rejected Raiden’s offer to go in his place, so Raiden could still live out the rest of his life. After entering the corridor, Snake initially starts walking through the immense radiation, but soon falls to his knees, crawling on. By the time he reaches the end, he has to drag himself with one arm, barely succeeding. A nerve-wracking moment many players fondly remember. Snake’s request to Otacon to ‘lock the door behind him’ (using the remote controlled Mark III) only emphasized the fact that Snake probably didn’t expect to make it out alive.

Big Boss’s appearance at the end This was considered the mother of all spoilers, but now that several years have passed most people have experienced this big twist for themselves. For those who didn’t know about it back in 2008, this was a very shocking plot twist at the very end of the game, just when the player thought it was all over. Big Boss appears one final time, makes peace with his son and explains his motives, at the same time realizing his mistakes. Then he dies in front of the grave of The Boss, the catalyst that started it all.