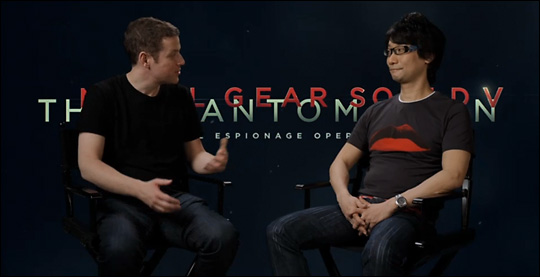 After Konami shared some new information about Metal Gear Solid V: The Phantom Pain at yesterday’s pre-E3 show, GTTV published an interview with Hideo Kojima, hosted by Geoff Keighley. One of the more interesting questions was whether or not the game is coming to the next generation consoles. Kojima responded:

“There is not much I can say right now, but E3 is coming up, and we hope we can share some details there. […] Everyone, please look forward to E3. You won’t be disappointed!” The rest of the interview revolved mainly around the new voice actor that was announced yesterday. Geoff Keighley asked Kojima why he chose to cast Kiefer Sutherland as the voice actor for Snake for this game. Kojima’s explanation was largely the same as the one given at the Konami pre-E3 event:

“The themes of MGSV are very dark. One of the major themes is revenge. It’s a dark story, so I didn’t want Snake to talk as much as in the past. Instead, he’ll convey his emotions through expressions and tone of voice. I wanted to aim for more of a nuanced and subtle performance.

As the capacity for expression in games has improved, we developed the FOX Engine to achieve a higher level of reality. Ideally, we would like to have used these tools to capture the voice, expressions and movements for the characters from a single actor. This time around, we couldn’t do that. However, in order to get one step closer, I wanted to make sure the actor who did the voice also acted out the facial expressions as well. Snake is now 49, and I was looking for someone who could realistically convey the feelings of this older, weathered Snake through both his facial expressions and his tone of voice. A friend of mine, producer Avi Arad, recommended Kiefer Sutherland, which made a lot of sense for us, so we approached him.”

He also confirmed that Kiefer Sutherland will be voicing Snake for both Ground Zeroes and The Phantom Pain.

Views: 411
Liked it? Take a second to support MGI on Patreon!