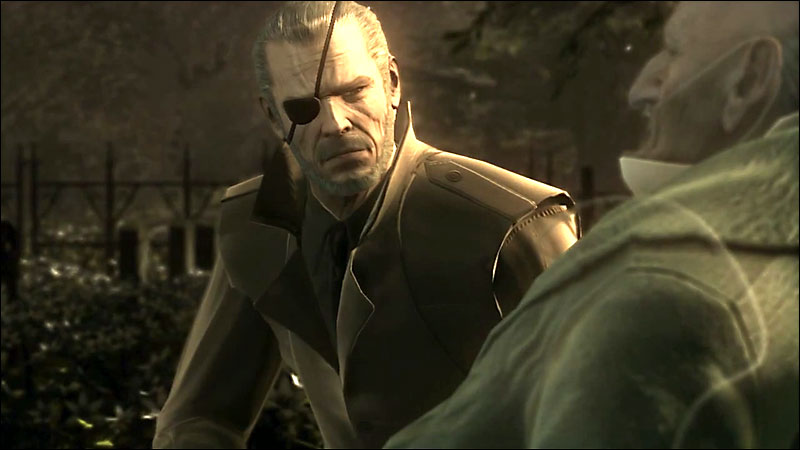 “It was then that the norms – manifested as AIs, the inheritors of Zero’s will… began to reproduce and take on a life of their own.”

The ‘after credits’ ending of Metal Gear Solid 4: Guns of the Patriots is in many ways one of the best scenes in the game, and it would be too much to list them all in a single article. That’s why this article will focus on one very important element in the scene: the death of Zero, by the hands of Big Boss himself, and its thematic relevance to the story.

The whole scene takes place at Arlington National Cemetery, the exact same place where MGS3 ends, and where forty years earlier the seeds that had been planted by the events of MGS3 were beginning to grow (notice the flowers that grew from the seeds of Big Boss’ bouquet serving as a visual metaphor).

Throughout the entirety of MGS4, Zero has been presented as the evil mastermind behind The Patriots organization, the true ruler of the world, someone who pulls the strings from the shadows. He is almost like a god, an omnipotent, omniscient being able to manipulate everything and everyone to achieve his goals. This is illustrated very clearly when Liquid-Ocelot, in his enthusiasm after successfully hijacking The System, looks up and shouts at the sky, as if he is really talking to a god in the heavens.

“Do you see this, Zero? We are victorious!”

Now, this image stands in stark contrast to what we see when we finally behold Zero at the end of MGS4. He is not a calculating strategist planning his next move. He is not a god with the fate of the world at his whim. Not anymore at least. Zero is trapped in his wheelchair, unable to move, kept alive by his medical equipment. His human side is gone. His control is gone. He is a prisoner to the machines that surround him. This is the real Zero. The same man that once served as the point of origin, the source, is no longer capable of anything.

“This man was the source of it all. And he doesn’t even realize it. He’s completely unaware of the fact that he led the world to the brink of ruin.”

Not only is Zero is no longer able to steer the fate of the world, he’s not even aware of it. His consciousness, his sense of good and evil, his human identity – none of those are still his. Big Boss takes a step back and observes Zero: a motionless, mentally absent body stuck to a wheelchair, with the only sounds coming from him the constant beeping and pumping of oxygen regulators.

“Even the mighty Patriots began with a single man. That one man’s desires grew huge… bloated. Absorbed technology, began to manipulate the economy. We realized too late… that we had created a beast. We had helped turn Zero… into 100. His sin… was ours. And for that reason… I’m taking it upon myself to send Zero… back to nothing.”

As Big Boss describes Zero’s rise to power, the camera shows him from a very low position, making him seem large, powerful, looming over us like a deity. But the contrast is unmistakable: what we see is an old man with all his power stripped from him, everything that makes him human, gone. He’s at the mercy of the machines, machines that now rule him, instead of the other way around. He cannot even breathe by himself, his machines breathe for him. And as the machines have come to control what was once Zero, the AIs have come to control what was once human civilization.

“Powered by the industrial and digital revolutions that came before it, this age gave birth to a twisted economic revolution – a battlefield revolution. It created a new world without substance. In this new world, there were no ideologies, no principles, no ideals, not even the thing she treasured most… loyalty. There was only the war economy. It was a colossal error in judgment – one Zero couldn’t possibly have foreseen.”

In an attempt to establish a uniform, borderless world Zero created a system operating on a global scale – but the AIs tasked to carry on his will created a new world instead: a world depending on an economy based on eternal warfare, a world with controlled senses and emotions. A world void of human ideals, void of humanity, void of Zero’s guidance. It stripped mankind of its humanity – and perhaps Zero was among the first to lose his. He was once a man, but now, he’s just the empty shell of the seed everything grew from. Zero, just as the AIs he created as his successors, had fallen into corruption, and the decay of his human body only emphasizes this.

“Now that I’m actually face to face with him again, the hatred is gone. All I feel is a deep sense of longing. And pity.”

By shutting off his breathing equipment, Big Boss frees Zero from the grasp of the machines. He gives him back his human mortality. For the first time in this scene, we can see a bit of life, sounds coming from Zero himself, a final convulsion as the machines have no longer control over his body. In a way, Big Boss doesn’t even kill him. He allows him to die, something the machines didn’t. Big Boss shuts off the machines that have extended his life for years.

As Zero gasps for air, Big Boss wraps his arms around him and comforts his old friend during his final moments. We see flashes of the events of Snake Eater, memories of a past long gone. Are they Big Boss’, or Zero’s? Or perhaps shared memories? Either way, they’re recollections of the events that started it all, before Outer Heaven, before The Patriots, before the seeds of a single bouquet of flowers turned into a field. As Zero draws his last breath, Big Boss seems relieved that it’s over. He gently closes Zero’s eyes, and steps away from the wheelchair. Now, it’s his turn to be erased.