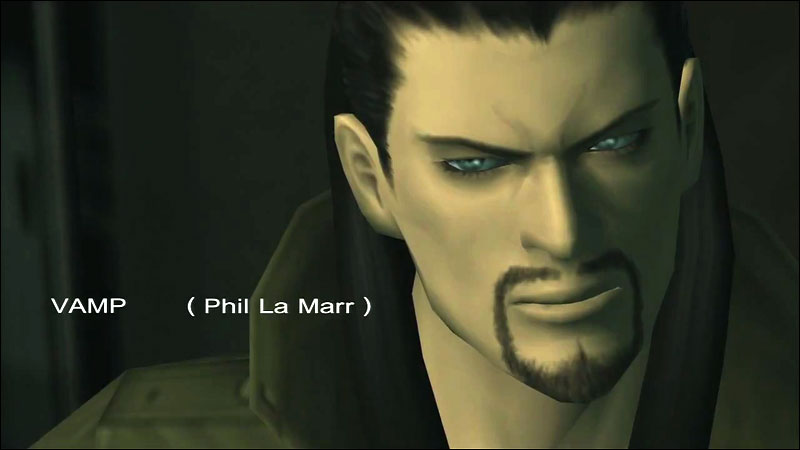 In an interview by Fragged Nation co-hosted by YongYea and Korrupt Ronin, actor Phil LaMarr talked about playing Vamp in the Metal Gear series.

Phil talked about how professional voice work became more of a factor in game development. “There came a point where video games started using union actors. […] I think the first Metal Gear was a high-water mark in that respect, since it took not only the visuals of gaming, but the storytelling and the performance level to a whole other level.” The emotionality and complexity of the story required professional actors for the characters. “You needed a higher level of performance in order to tell that story the way that the creators envisioned it.” How did Phil get the role of Vamp? He already knew about the game because he played the first one (he also played 2 but did not beat 4 because it was too hard), and he loved it. He had worked with Kris Zimmerman before for cartoons. “She was auditioning people for Metal Gear [Solid] 2, and I said: please, you’ve got to let me audition for something. I need to be a part of this.” Phil Lamarr said he first auditioned for someone like the DARPA Chief (he probably means either Peter Stillman or Scott Dolph, the DARPA Chief already died in MGS1 and wasn’t in 2). “We’ve got this other character, we’re not really sure what we need for this.” She described Vamp to him, and Phil tried to come up with a vampire type voice that was not typical (although he may not really be a vampire, his presentation is certainly vampire-like). “If you’re a vampire you’re dead. If you’re dead you don’t need to breathe. What does someone sound like if they’re basically talking without breathing?” Kris Zimmerman’s reaction to Vamp’s voice was something like ‘ew, I think that’s it’.

Phil didn’t expect Vamp to return after MGS2, but was really glad he got to play the role again for MGS4. “Especially playing a villain, you don’t expect to ever come back. But the fact that they did bring the character back was just a wonderful gift.” It wasn’t difficult to find the voice again after the gap between MGS2 and 4. “[MGS]4 was actually easier than working on 2.”

Did his performance have any influence on the character? Phil doesn’t think so. “Almost none at all. Because the game was created and animated with the Japanese voice actors. We came in after the fact, we basically dubbed it. So for me to pretend that I had any impact on the animation or the design would just be breaking my arm to pat myself on the back.” They had to make their lines fit into the game as it was, over the Japanese voice track (for MGS2), and video footage of the Japanese mo-cap actors (for MGS4) (as the hosts noted, for MGSV it’s the other way around, with the English voices being the basis and the Japanese voices being the dub). When talking about working with Quinton Flynn (Vamp vs Raiden in MGS4), Phil said they did the recording together, which really helped. “Because of the nature of this rivalry, I mean, it’s Batman and the Joker. Essential enemies. I’m his nemesis. You’re of the same, you know, nanites [nanomachines], and we are on two different sides of it.”

To watch the full interview, follow the link at the bottom.